The story of Geneva's Jet d'Eau

Tourists come every year from all over the world to admire the Jet d'Eau, one of the most famous landmarks of this international city. But the Jet d'Eau wasn't always a tourist attraction. This is the story of how Geneva's unique fountain came to be and how it acquired the iconic status it enjoys today.

The world-famous Jet d'Eau dates back to the 19th century. Its white plume rises 140m into the air from a stone jetty on the lakeside at Eaux-Vives; that is about 50m higher than the Statue of Liberty.

Turned on each morning by caretakers whose job it is to keep the fountain working, the Jet d'Eau is one of the city's most famous landmarks, and is considered to symbolise the city's ambition and vitality – a mark of its international status.

Where did the idea come from to build a fountain in the harbour? The first Jet d'Eau actually came about because of technical issues. "It's a bit of a fluke that there's a water jet in Geneva," jokes Hervé Guinand, a member of the environmental department at Services Industriels de Genève (SIG), which operates the attraction.

Invented to solve an engineering problem

Did you know that the Jet d'Eau was created for technical reasons? It was 1886 and the city was in full boom.  From only 64,000 habitants in 1850, the city's population had grown to 100,000 in 1890. Geneva needed energy to power the machines that were driving its industry and trades, so it built a hydraulic plant at le Coulouvrenière. This power distribution network exploited the Rhone’s current. "A hydraulic pump used water to power the machinery, particularly in watchmaking workshops," explains Hervé Guinand.

The problem was that at night when the craftsmen stopped work, excess pressure build-up in the system meant the Coulouvrenière engineers had to hurry to stop the pumps one by one. A safety valve was soon added to control the pressure – and this spouted the famous jet of water into the sky. This emblem of the city was thus born of a technical problem. At the time, the jet was just 30m high and only erupted in the evening at one side of the plant.

An innovation in engineering meant it was no longer necessary to release this jet of water to avoid the build-up of pressure. By this time, however, passers-by had grown so fond of its sporadic eruptions that the City of Geneva decided to make the jet a tourist attraction. A second Jet d'Eau was built in a more visible spot on the jetty at Eaux-Vives, where it is still located today. Inaugurated in 1891 for the Federal Gymnastics Festival, with a height of 90m this jet was even bigger than its predecessor. It was lit up for the first time to celebrate the 600th anniversary of the Swiss Confederation.

Initially, the jet was only in operation on Sundays and public holidays, and drew water from the drinking water system. It proved to be so popular that from 1906 it was turned on from time to time on weekdays. This installation gained a new feature: its unique shape. The fountain’s initial array of five jets was later replaced by a single, vertical one.

The jet and its system were again modified in 1951. Gone were the days when drinking water was propelled into the air, this version filtered the lake water before expelling it high over the jetty. With its modernised mechanism, the watery plume now achieved a height of 140m. Its own new partially submerged pumping station is powerful enough to propel one cubic metre of water into the air every two seconds. 500 litres of water per second is expelled at a speed of 200km/h. The two pumps – named Jura and Salève by Swiss manufacturer Sulzer – spout 7 tonnes of water. Another of the Jet d'Eau's secrets is its 'nozzle' which allows the water to be projected at a diameter of 16 cm at the base, filled with millions of tiny air bubbles. It is this vaporisation which makes the Jet d’Eau white.

The same pumps have been doing their job ever since. However, the fountain has undergone some additional innovations in its time.  It has been equipped with an LED projector box which makes it possible to light up the fountain in the colours of a national flag for special events. A removable walkway has also been added to allow people with disabilities to access the pier so they can take part in group guided tours of the pump room organised by SIG. 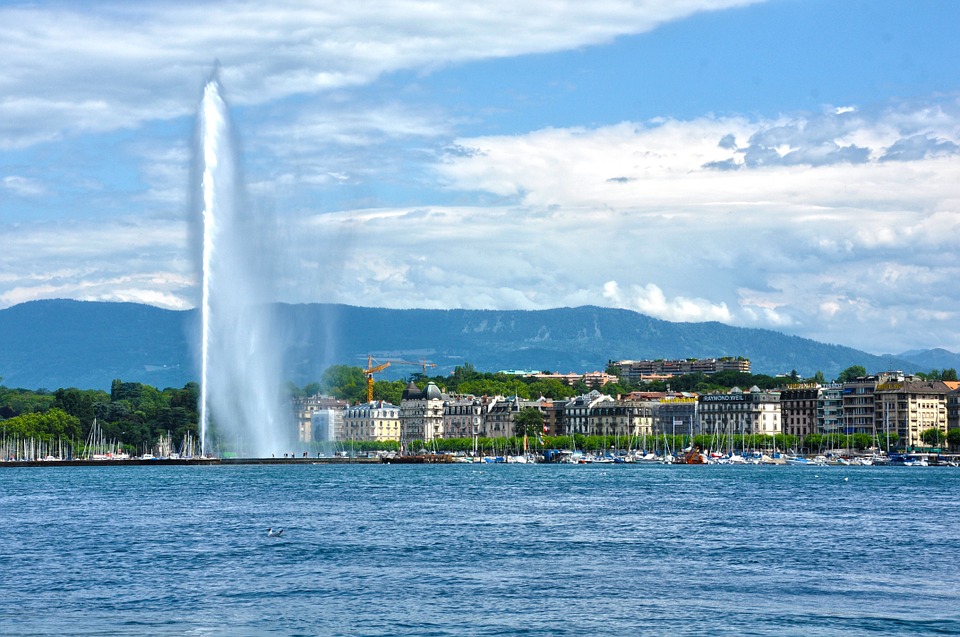 The Jet d'Eau isn't automatic. Every morning a caretaker presses a button to turn it on. With a hand on the controls and an eye on the weather, the caretaker supervises the attraction until it is turned off again at night. The caretakers are retired SIG staff who volunteer and are paid to keep it running. They are ready to shut down the system in two situations. If the wind picks up, the jet is turned off as soon as the first drops splash onto the boats or the quayside. When the temperature drops to freezing point, the jet is stopped to prevent its water droplets from covering the walkways in a slippery sheet of ice.

Although its height record was broken many years ago, Geneva's Jet d'Eau still has a huge amount of international prestige. "Sometimes city authorities ask to visit our facilities and see the pumping station, because our water jet is famous around the world," explains Hervé Guinand. "We make no secret of its engineering, and we gladly share our experiences with others." That is what happened when Seoul took an interest in the Jet d'Eau ahead of the inauguration of its own water jet in 2002 for the FIFA World Cup in South Korea. At 202 metres high this jet is among the highest in the world, alongside those of Jeddah in Saudi Arabia and Sharjah in the United Arab Emirates.