Cargo sous terrain (CST) is a new, innovative, totally ecological, state-of-the-art project. As the idea is so new, it also brings with it uncertainties and doubts about its implementation. However, this did not dissuade the Federal Council: in February 2020 it issued the legal basis for the project, which aims to take freight transport underground.

The legal basis enables the developers and promoters to give substance to their vision and demonstrate that – with the support of the authorities – it is feasible.
Among them is Patrik Aellig, head of Communications and Public Affairs at CST, who shares with us some insights and clears up some of the doubts about the project.
"In 2031, Cargo sous terrain (CST) will provide Switzerland with a privately-financed, sustainable and automated complete logistics system which will ensure punctual deliveries of goods, boost the competitiveness of the economy, and guarantee the high quality of life of the Swiss people."
From 2031, the first section of the project will link the main distribution centres around the village of Härkingen-Niederbipp in the canton of Solothurn to the Zurich metropolitan area.

The line will be built entirely underground and will be about 70km long. But the project will not stop there: this first line will be part of a much wider network that will include multiple destinations. "CST will transport and distribute small goods continuously and reliably. The backbone of the system will be a 490km-long tunnel system stretching from Geneva to St Gallen and from Basel to Lucerne, with an additional branch connecting Bern to Thun." The entire network is scheduled to be completed by 2045. 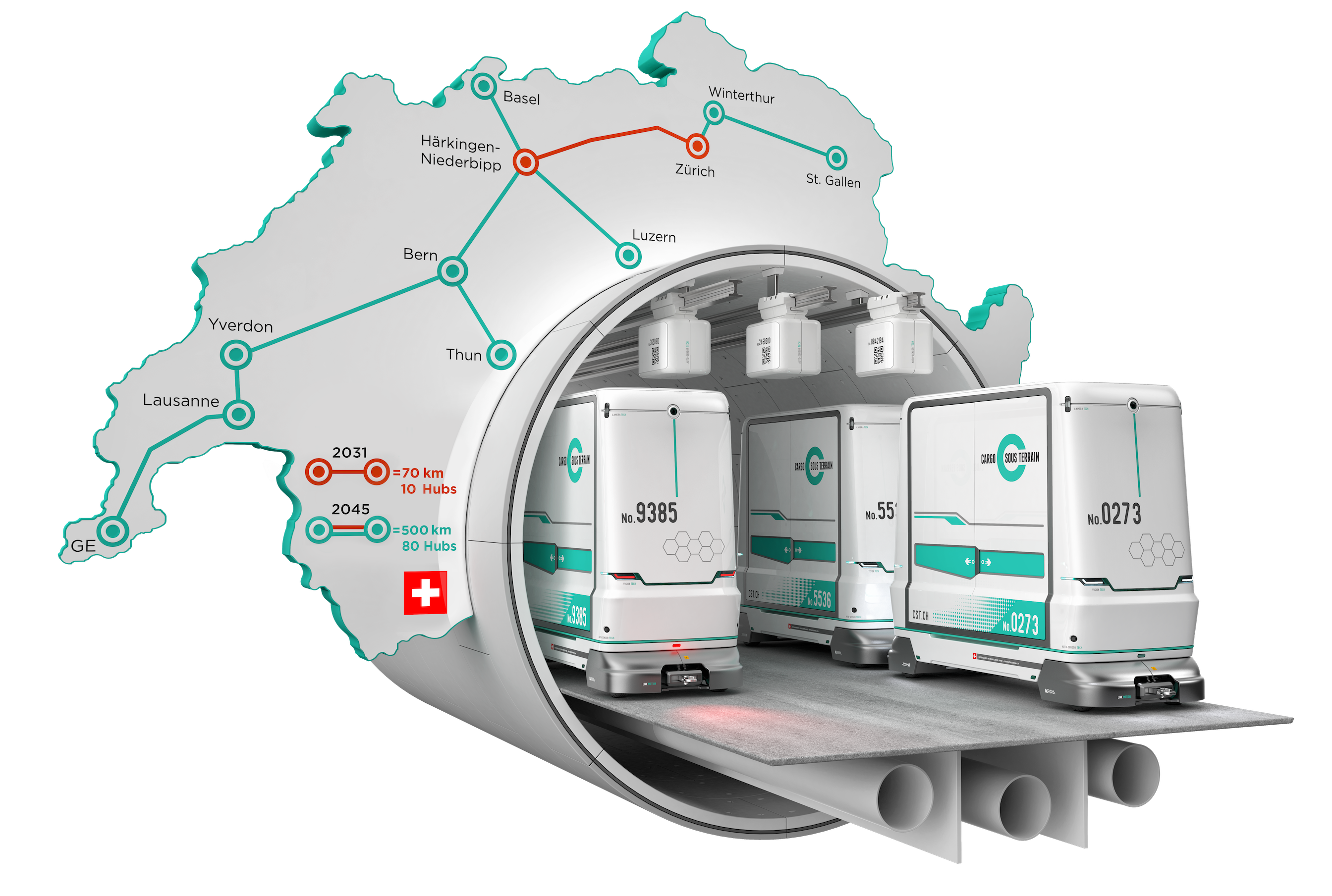 One of the aims of CST is to partially free up roads and railways from freight transport. "The CST city logistics system will seamlessly link the tunnels with cities via the connecting hubs, and will rely on synergies in above-ground supply and disposal. It will relieve cities of up to 30% of delivery traffic and 50% of noise emissions." In an increasingly green world, the creators of the CST system were bound to consider renewable sources for energy supply: "The CST system will be powered exclusively by renewable energy," making it "ecologically significantly better than conventional transport," says Aellig. Compared to current road transport, CO2 emissions per tonne of goods transported will be reduced by up to 80%. On the first section, from Härkingen to Zurich, the equivalent of 40,000 tonnes of CO2 will be saved each year.

More and more companies, corporations and start-ups are focusing on the partial or total introduction of renewable energies to combat climate change and to improve the quality of life of the population. Nevertheless, the global economy – like Switzerland's – is still overwhelmingly based on non-renewables. In the future, the balance could shift increasingly towards green projects, such as CST, which "favour the transformation to renewable energy production, promote digitalisation and follow the current trend towards small-scale, extremely flexible, pallet-based delivery. This is in contrast to today's mode of transportation with larger units, less flexible transportation, and often fossil-based," says Aellig.

The new system will be used for freight transport, while people will continue to take conventional means of transport. CST has not included passenger transport in the project – and has no plans to do so in the future. Patrik Aellig explains the reasoning behind this decision: "Passenger transportation would mean a totally different system, both technically and in terms of investment." But that does not mean that people will not be able to benefit from the construction of CST, as one of the key concepts of the project is to "create space on the surface that can be used for the people who live there."

By no means will the project be easy to implement, since it involves the construction of long underground tunnels, which could come up against a number of obstacles of an environmental nature (ecological aspects will have to be taken into account) but also logistical problems, such as negotiations with communal authorities or private owners regarding compulsory purchase and claims for compensation.
These difficulties will however be addressed when the project becomes more concrete and it is hoped that the planned schedule will be adhered to.
European investors have already expressed an interest in the project and their desire to participate in its implementation. However, the Federal Council has stated that it intends to keep the majority of the capital in Swiss hands.
The green light from the government in any case gives hope to the private developers and promoters, who can now demonstrate that their basic concept is realistic and feasible, as well as potentially efficient, in the eyes of the public authorities.

Going back to the origins of the project, just 10 years ago, says Aellig "engineers with a technical vision got together with interested parties from the retail sector who wanted to guarantee the reliability of supply chains in the future, even with increasing congestion and transportation bottlenecks.  That's where the concept began to take shape and we've been developing it ever since, with the help of many Swiss companies willing to make a contribution, both financially and through collaboration."
Having talked about the transport system in general, we could not avoid asking for details about the relationship that CST will have with the existing transport sector in Switzerland – especially rail, but also road. So how will CST fit into this long-established sector? According to Patrik Aellig, there will be no stepping on each other's toes and no risk of creating tensions – quite the opposite: "CST will be in addition to existing means of transport, you will always have and need other forms as well. It will open up a new way of looking at transportation, but also a new physical route for logistics. And it will broaden our horizons, I think we will see a trend towards other underground uses, to increase the quality of life above ground." 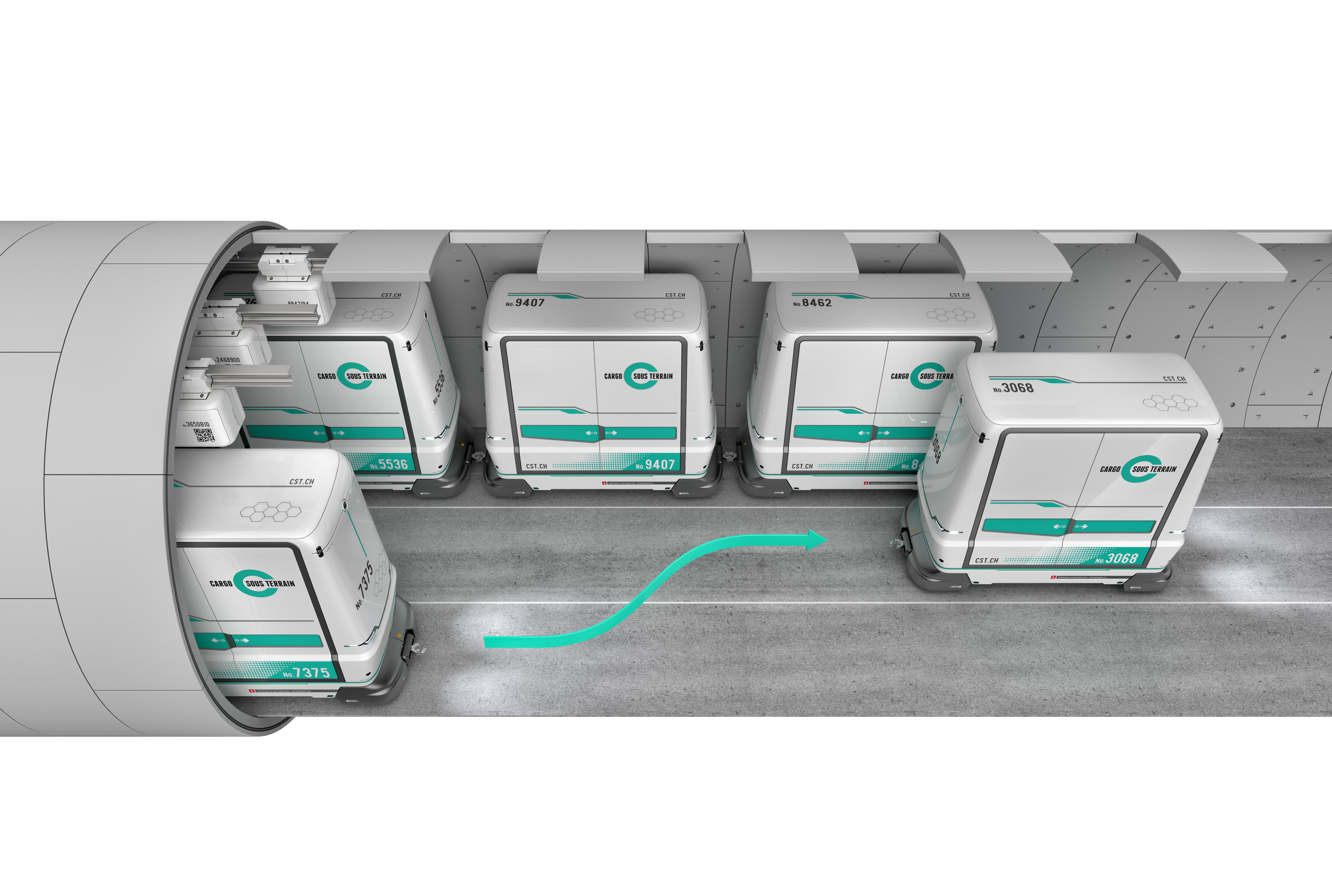 So far we have talked almost exclusively about future projections, as the project will not be started before 2030 and will not be completed until at least 2045. No one can know what the world will be like at that point – not even Patrik Aellig – but he is clear about what CST aims to achieve in the years to come: "Of course the world will change. I dare not predict what it will look like in 30 years. All I can say is we are trying to contribute, generally speaking, to making it a better world.  What we surely do: we consider the current developments and try to model the future as precisely as possible according to the needs of the market and society. Because we are a market-based, privately funded project that in the end wants to satisfy the needs of customers and consumers – but also society as a whole, and especially the cities and urban areas that need solutions to avoid a loss of quality of life."

What makes Switzerland particularly well suited for this project? "Apart from the Alps we have a densely populated country, so the idea of developing CST here was quite compelling. Maybe you are also raising the question why Switzerland has been able to come quite far in developing a concept like ours.  One obvious reason, there is money around to invest, but also the collaborative spirit that you automatically develop in a smaller country helps. Plus, we tend to achieve progress rather slowly, but in a way that hopefully everyone is included and can be part of it. Another aspect is, we are used to building tunnels, so that is nothing unusual here."

After all these explanations and clarifications can we say that Switzerland will be at the forefront in this sector, and might it even be described as a pioneer in the world? "I think it is fair to say that we have some kind of a forerunner role in the areas of developing underground transportation, but also city logistics, effective urban distribution and digitalisation of logistics.  There are other projects around the globe, but none has reached the stage that we have financially and legally, especially now as we will see the legal framework being debated in the Swiss Parliament soon."