A little birdie from Switzerland?

"Watch the birdie." This phrase once used by photographers to capture the attention of their subjects could just as easily apply to cuckoo clocks. Who among us has never heard the call of a cuckoo mark the passing of another hour? The cuckoo clock has a history dating back centuries that first began in the Black Forest area of Germany, but which was eventually to take flight in Switzerland. Let's shed some light on this funny little bird that conquered the world!

The invention of the cuckoo clock is attributed to German clockmaker Franz Ketterer, who attempted to recreate the crow of a rooster in his clocks at the start of the 18th century. In fact, his system of bellows and whistles that produced two different notes actually imitated the call of the common cuckoo. The success of Ketterer's first cuckoo clock inspired craftsmen throughout the region to manufacture similar timepieces during the long winter months with the aim of selling them in the summer.

The cuckoo clock finds its form

In the decades that followed, the cuckoo clock took on a variety of forms before the style that is now considered "traditional" emerged in the mid-19th century. Representing a chalet, the typical cuckoo clock is a wall clock with visible pendulum. The movement features two weights and a mechanical bird which appears as the clock strikes the hour, leans forward and emits its song: the famous "cuckoo, cuckoo". 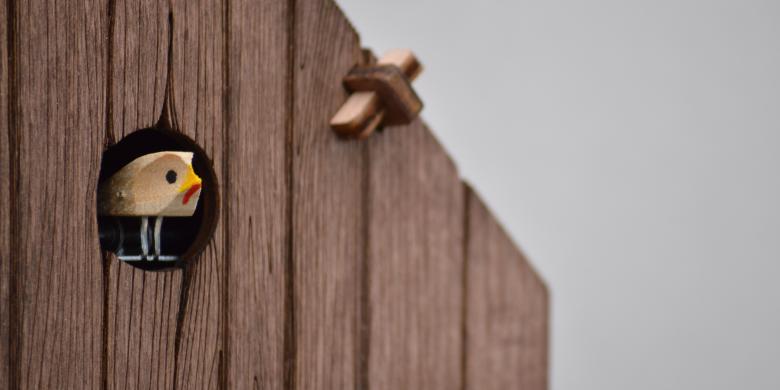 But the triumphal march of the cuckoo clock actually began in Switzerland in the early 20th century, in the Bern area. And more precisely, in the little town of Brienz. Picture the scene: 1920, on the northern shore of Lake Brienz, in the very heart of Switzerland. Robert Loetscher, a family-run business producing Swiss chalet music boxes that were renowned for their quality, decided to leverage its craftsmanship and expertise by expanding into the manufacture of cuckoo clocks. The company did so by fashioning a chalet-style music box into which it inserted a mechanical clock movement and dial: the first real "Swiss chalet" cuckoo clock had been invented! 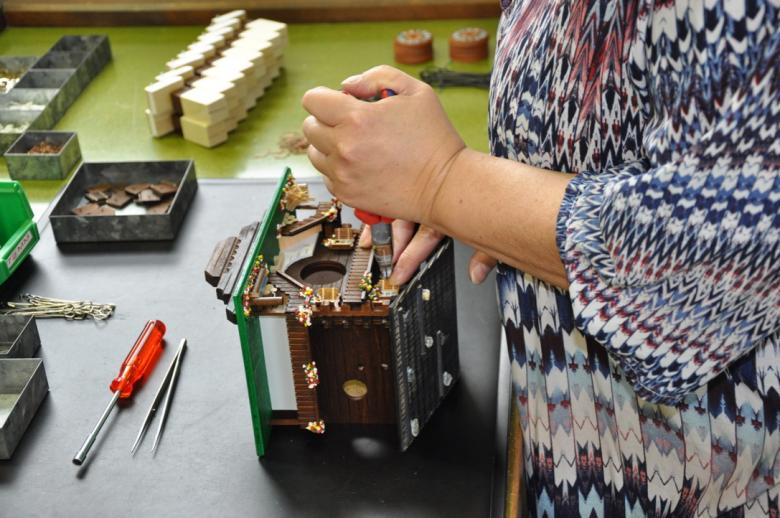 The success of this first model opened up a whole new area of activity for Loetscher and had repercussions throughout the region. The local craftsmen came up with new cuckoo clock designs by drawing on typical scenes of life in the Swiss Alps. Thus, animated figures that dance to the sound of the music made their first appearance, along with elaborate, hand-carved decorations such as animals grazing on mountain pastures, milk jugs and waterwheels. These innovations not only reflected the craftsmanship and artistry of a cuckoo clock "made in Switzerland", they also put the town of Brienz on the map as a tourist destination of traditional character.

For over a century now, the cuckoo clock has continued to travel the globe, conquering the hearts of everyone who loves Switzerland. These timepieces can be found everywhere, and the skilled workers at Loetscher never cease to be surprised by the wide variety of people who come to visit the region in search of a genuine cuckoo clock or who order directly online. The company's success can certainly be explained by the precision and meticulousness that go into working the wood, as well as the quality of the clockmaking technology, a prime example of Swiss expertise. 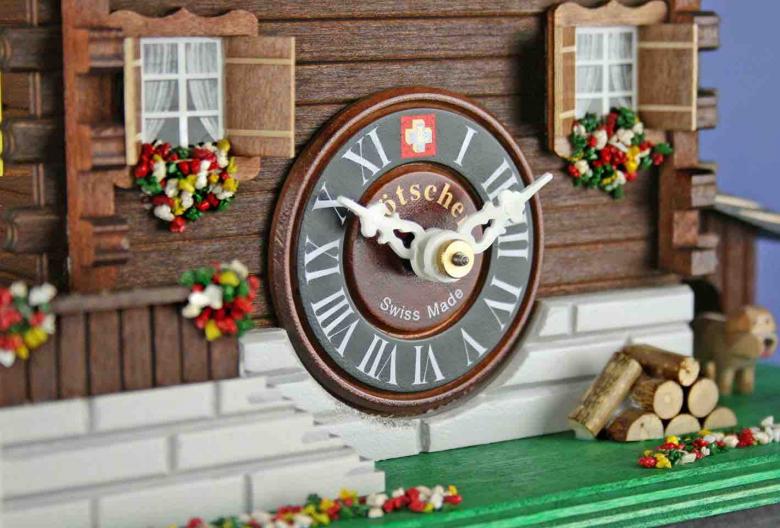 The Swiss cuckoo clock reinvents itself

The cuckoo clock has recently taken on a new look. Blue, red, green, yellow and black cuckoo clocks have gradually begun to appear in the Lausanne area... The brains behind this startling new development, which marries respect for tradition with a resolute modernity, are industrial designers Martino D’Esposito and Alexandre Gaillard, childhood friends who set up Swiss Koo at the end of 2013. Modern designs in coloured wood, limited editions, a new model each year, with every one being hand signed – these are the hallmarks of the new-look Swiss cuckoo clock. 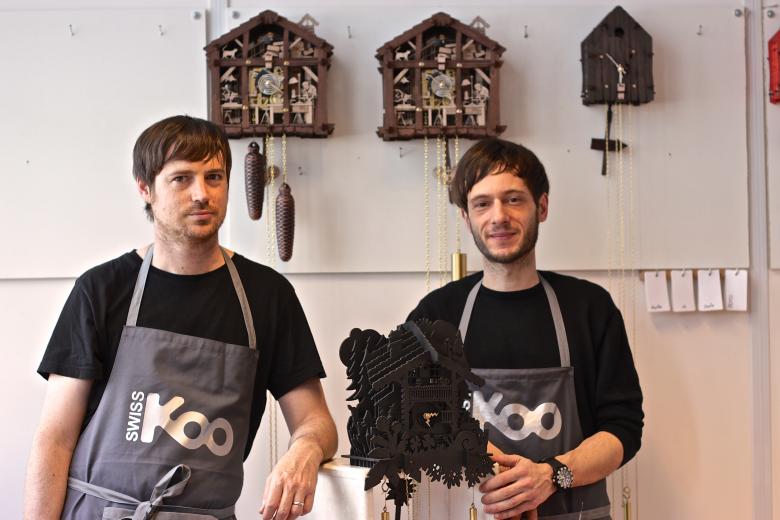 Quality as a recurrent theme

For both Swiss Koo and Loetscher, the cuckoo clock is a true piece of craftsmanship that reflects the expertise that has gone into making it, evokes tradition and conveys a certain idea of what typical Swiss quality entails. The success of traditional cuckoo clocks and, in recent years, the craze for modern designs points to a bright future for the “little Swiss birdie”. 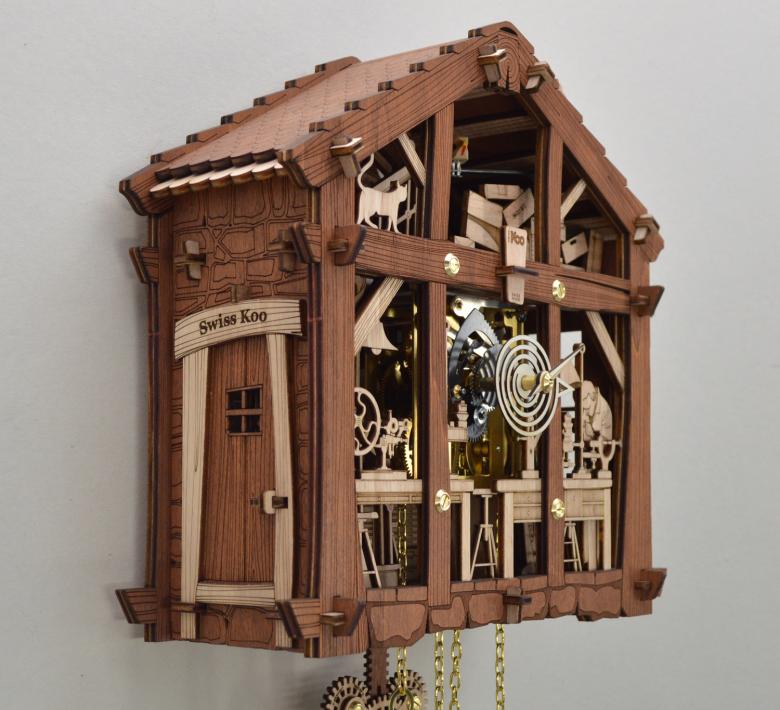