The Swiss Family Robinson – father, mother and four sons – survive a shipwreck on the high seas. Stranded on a desert island, the family tame their new environment and make it their home. Sound familiar? This 18th century classic inspired by Robinson Crusoe became even more popular abroad than it is in Switzerland. Find out why.

The Robinson family's epic journey was born of the imagination of the Bernese pastor Johann David Wyss, who wrote the story for his children at the end of the 18th century. It was his son, Johann Rudolf, who published the novel. The first two of the four volumes were published in 1812 and 1813, and the second two in 1826 and 1827. While the adventure was an international hit from the very beginning – particularly among English-speaking audiences – it has fallen into obscurity at home since the start of the 20th century, especially among French-speaking Swiss readers.

The story was first adapted in French in 1814 by the Lausanne novelist and translator Isabelle de Montolieu. "At that time, it was rather rare in our country for German books to be translated into French," says Professor Daniel Maggetti, director of the Centre des littératures en Suisse romande at the University of Lausanne. "The fact that it was translated so quickly was proof of its potential in Switzerland. The French version, 'Le Robinson suisse', rapidly acquired a devoted following, which allowed it to become a core classic of Swiss literature." The story was a best-seller at home and abroad, attracting an English-speaking readership in particular. The book has inspired films, series and even theme parks. "This success is due to the fact that American culture recognised in the text an element of the beloved boy-scout. It is no accident that The Swiss Family Robinson was made into a film by Walt Disney in 1960," says Claire Jaquier, a specialist in literature and cultural history of the Swiss Enlightenment at the University of Neuchâtel. "We do not see the same success in Switzerland, Germany or France, where the work, although present, re-worked and adapted over time, has a much smaller readership than in American culture".

"The Wysses cooked up all the ingredients for a successful story," notes Daniel Maggetti. "They were able to construct a fascinating tale and build up its potential. After the shipwreck, the survivors have to rebuild a world in which to live. The family embodies one of humanity's basic myths: left to its own devices, a group of people must make something of itself in a hostile environment. It's an attractive premise which appeals to readers. On the island, the family must also constantly adapt to survive, which is a source of new adventures. The possibilities for new stories are endless, which makes it very attractive to audiences". According to Maggetti, The Swiss Family Robinson was rooted in the Swiss tradition and read by the country's youth until the Second World War, after which interest waned, especially among readers in French-speaking Switzerland. "Up until the 1920s and 30s, Le Robinson suisse was used and quoted by renowned authors such as Charles Ferdinand Ramuz and Catherine Colomb. Resourcefulness, exile and isolation were a reality for Swiss people, but in the 20th century this wasn't the image that Switzerland wanted to promote." 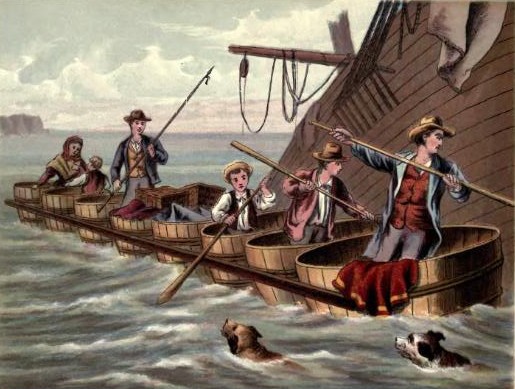 The exoticism of The Swiss Family Robinson was inspired by the novel Robinson Crusoe by the English author Daniel Defoe. The Wysses, "both father and son, were intellectuals, the former a pastor and the latter a professor of philosophy. As such, they read 18th century natural history textbooks and encyclopaedias. This type of work enjoyed a large readership during the Enlightenment, and Swiss libraries stocked them. The flora, fauna and geographical particularities of non-European countries were richly described and illustrated," says Claire Jaquier. The Swiss Family Robinson reflects a fascination for the rest of the world, but it also presents the Swiss system as an effective and universally valid model. Like Robinson Crusoe, the survivors are resourceful and have the skills to survive on a desert island, but they retain character traits specific to their national identity. "The protagonists are characterised primarily by the Protestant ethics espoused by the father and pastor: the family, which venerates its homeland, is pious and believes in the virtues of hard work and religious obedience."

The Swiss Family Robinson has another dominant theme linked to Swiss history – that of exile. Switzerland's tradition of migration was not an aspect that the country was keen to promote at the time. "When The Swiss Family Robinson had the potential to gain a wider readership, that is after the Second World War and also in the 1960s, the Swiss were more interested in promoting their sense of belonging to the homeland," says Daniel Maggetti. The exoticism of The Swiss Family Robinson was at odds with the Swiss reality of the time. That is why another Swiss literary classic, Johanna Spyri's Heidi, became the more popular of the two. "The Heidi model is the opposite of The Swiss Family Robinson. The story takes place in the Swiss mountains and the young girl who is forced into exile eventually returns. The narrative fosters the notion of belonging and Swiss heritage, which made it easier for readers to identify with it," notes Daniel Maggetti. Both novels are important to Swiss literature, but Heidi remains the better known of the two.

Daniel Defoe's story of Robinson Crusoe has inspired many Swiss figures. The destiny of another Bernese man, Alfred von Rodt, also crossed paths with that of the fictional adventurer. During a trip in 1877, he landed on the Chilean island that inspired the story of Robinson Crusoe. The aristocrat became governor of the archipelago, which he rented for 1,500 dollars a year. He married a woman from the island, started a family and reigned over his 'small kingdom' until his death in 1905. Today, the island bears the name 'Robinson Crusoe' and about forty descendants of the von Rodt family still live there, observes Stéphane Goël, Swiss director and author of Insular, a film dedicated to the story of Alfred von Rodt and his descendants. 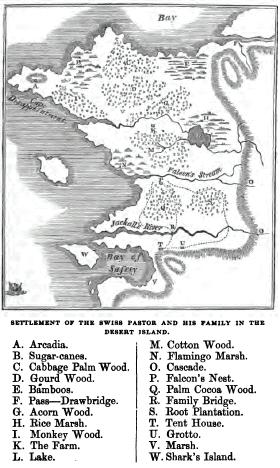 "Alfred von Rodt's figure regained importance on the island after the 2010 tsunami. Robinson Crusoe Island was devastated and Switzerland financed the reconstruction of the tomb of the Bernese baron, in addition to an explanatory plaque. This has revived a Swiss spirit on the island; Switzerland's white cross on a red background and the flags of the Swiss cantons fly alongside the Chilean colours on special occasions."