Lotti Latrous: standing up for life, for love, for others

Liselotte, or Lotti for short, chose to give up her life of ease and comfort and devote herself, body and soul, to AIDS patients. She has now spent two decades caring for women dying of AIDS-related illnesses and their children who are also infected with HIV. Her work has earned her the accolade 'Swiss woman of the year 2004'.

She would never have imagined that life would take her to the Ivory Coast in West Africa. But in 1994, she gave up everything to accompany her husband when he was appointed managing director of a Nestlé factory there.

She met him, a technical draftsman by trade, while he was studying engineering in Switzerland. Lotti was 17 years old. When his father died suddenly, he was forced to return to Tunisia, and take care of the family as the eldest son. Lotti was not prepared for their romance to end just because he had to go home. But this also meant giving up her dream of becoming a nurse. Lotti abandoned her studies and looked for work so that she could support her boyfriend. She found a job as a care assistant at a private hospital in Switzerland. "I sent CHF 200 from my wages to help my boyfriend and his family in Tunisia."

Lotti's family could not understand why she was choosing to do this. At the time, Lotti was simply following her heart, but she ended up following her partner all over the world. On completing his engineering degree, her husband joined Nestlé and embarked on an international career: five years in Saudi Arabia, seven years in Nigeria, and five more years in Egypt. In each of these countries Lotti worked as a volunteer alongside raising her three children. In 1994, she found herself alone at home in Abidjan while her husband was at work and the children were at school. "We had a large house in Les Deux-Plateaux, an upmarket neighbourhood", Lotti recalls. But she wanted to continue volunteering, "so I became involved in the Ivory Coast International Women's Association."

It all falls into place

In 1997, the wife of the Swiss ambassador to the Ivory Coast took Lotti on a visit to the Missionary Sisters of Charity in Koumassi, a shantytown suburb of Abidjan, where horrifying scenes awaited them. "It was a place where the sick were just left to die, including young women and children," Lotti says, her voice breaking with emotion. At the time, sub-Saharan Africa was hit hard by HIV, with at least 83% of deaths from AIDS-related illness occurring in this part of the world*.

She went back the next day, and the next few days. "Initially, I went to hand out medicines to the sick. Then I just kept going back – I was kind of addicted. I used to go there every day and stay from dawn to dusk," she says.

Lotti was completely engrossed when she was there and didn't notice time passing. This place where people were dying became her second home. "Sometimes I would go there in the morning to clean the body of a deceased person. Often I would call my family to say I wasn't coming home. Sometimes the nuns would call me at two in the morning and tell me that someone I'd become fond of was about to die. I would go there straight away to be with them. "I was even there at weekends. No more trips to the beach, no more parties or other social functions. I couldn't enjoy myself when I knew that people were suffering just a short distance away. I changed my life radically," she says.

Just when Lotti thought she had seen it all, she drove to Vridi-Canal, another shantytown in Abidjan. There, she discovered far worse: "people abandoned by their families, lying on mats, wrapped in bin bags, without any blankets, left to die alone...", she recalls, on the verge of tears. She had the idea that she could build somewhere to accommodate these people and "allow them to die in dignity".

In Adjouffou, another poor area, she obtained a 500 m² plot of land, where she managed to turn old containers into outpatient rooms. Four other people were also working with Lotti: a doctor, a pharmacist, a nurse and a cleaner.

But local inhabitants started targeting the facility, as they were scared of the hearses going in and out. "At the time, people were dying in droves of AIDS-related illnesses," Lotti recalls. There were threats, attacks and intimidation. She moved the centre to a different location and, on her husband's advice, set up a dispensary in 1999, followed by a hospice in 2002. Her aim was to accommodate and care for the sick and bring dignity to the dying, not just by providing beds, bedding and people to change the beds but, most of all, by showing love: "we provided end-of-life care for thousands of patients. And many mothers who died left their children with us.” Dying mothers would often make Lotti promise to take care of their children, which meant she had to set up an orphanage.

Lotti got hold of another piece of land on which she set up a facility, which was destroyed overnight by locals who also threatened her personally. "They said to my face: we don't want you here – you've just brought us a bunch of people with AIDS!"

Again on her husband's advice, she rebuilt the facility – a 50-bed orphanage – on the Adjouffou site. "The children put life back into the place with their laughter, crying and screaming." The centre was also taking care of 500 women and their children. "As well as their rent, we made a microfinance facility available to the women, enabling them to invest in small businesses and become self-sufficient. A cooler for selling fruit juices or hair extensions for braids, enabling them to earn money and buy their own food," says Lotti. When the mothers died, she continued to pay their rent and take care of their children.

In 2016, she had to move the centre to another part of town. They received a letter from the town hall warning them that the area would be cleared to make way for an airport expansion. Lotti found a site that suited her purposes in Grand-Bassam, about fifteen kilometres from Abidjan: a 40-year-old rubbish tip on swampy land bordering a poor neighbourhood.

They first had to undertake a massive waste disposal operation. Once this was completed, they built the current premises and later purchased a neighbouring villa, which used to be owned by expatriates. The Centre L'Espoir was born. The centre how has 80 members of staff, including three doctors, nurses, bio-technicians, radiologists, psychologists, maintenance staff and drivers. The centre has treated 5,300 HIV patients since it was set up.

The Centre L'Espoir also operates an outpatient clinic, delivering an average of 60 medical consultations a day free of charge. "Medicines are provided to those who can't afford it. We don't turn anyone away. Funds are available to help social hardship cases. But we generally ask for a contribution, no matter how small," explains Lotti. It's about respecting people's dignity. "Eight hundred children are also enrolled at the school in any given year," she adds.

"At first I cried a lot when providing end-of-life support. It all seemed terribly unfair, especially for the children. But in time, I learned to stop crying and put my energy into comforting the sick," says Lotti. Things also took a turn for the better. "We started saving more and more lives, catching the disease early enough so it could be treated." 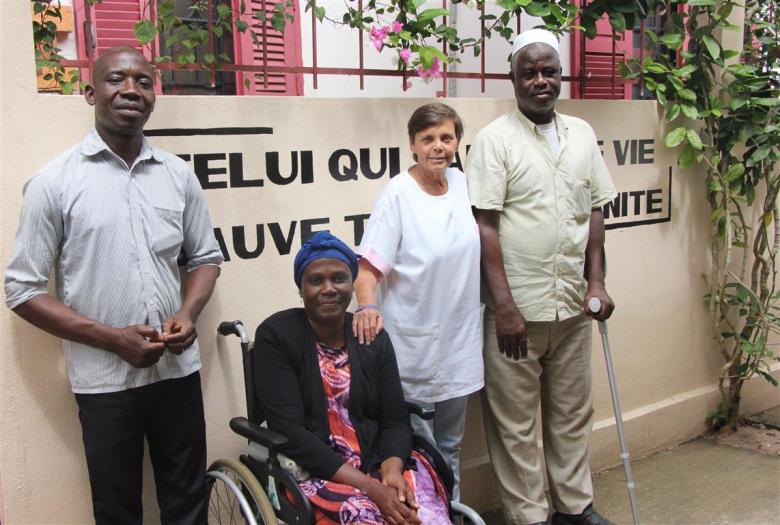 Lotti has settled into a routine at the Centre L'Espoir. She smiles at some children running around in the playground, and has a nice little chat with some teenagers sitting on the terrace of the villa they call home. The older ones read books or play cards. Further back, there's a room for the terminally ill where patients receive palliative care. And 'Maman Lotti' has a smile for everyone. She greets people, hugs them and says reassuring words. "Have you taken your medication?" she asks a young woman, stroking her cheek.

It is noon. We are in the centre gardens and it's time for a break. Lotti is worried. "Little Clarisse has been close to dying for two weeks." Stars have been drawn on the walls of the girl's room. "It was one of her last requests. We also organised a birthday party for her with all the other children. Clarisse wore a new dress and there was a cake..."

Lotti always finds the last few days the most difficult. "Every time someone passes away, it leaves a big void," she sighs. Little Clarisse doesn't want to sleep in her room anymore. "She insisted I stay with her in the small chapel, so I've put a mattress in there now," says Lotti. The chapel, a small room that serves as a place of prayer, is next to the mosque, although there is no wall separating Christians from Muslims. They all gather at Clarisse's bedside to pray together and talk.

"The fight continues for the other children. I have to be there for them, to help them fight," says Lotti. "They lead a normal life, like any children of their age, and can imagine a future where they have a job and a family," she says proudly. Although they have HIV, these young people are aware of the fact that they have been rescued and can see a life ahead, thanks to Lotti, whom they affectionately call 'Maman'.

Lotti has no thought of reward other than what her experiences have taught her. "This is where I've found the meaning of life. There's no point in chasing money and fancy houses: our purpose in life is to help our fellow human beings."