The Swiss football team's goalkeeper Yann Sommer has become the hero of an entire country thanks to his outstanding performance in the Euro 2020 match against France. Let's take a closer look at this young father who is as successful as he is unassuming.

If a survey were taken today to find out which Swiss celebrity is the most popular, Yann Sommer would undoubtedly win by a landslide. His recent exploits have made him a national hero. During the Euros, in June 2021, it was thanks to his miraculous saves that Switzerland derailed the favourite of the championship, France, in front of an entire country in a frenzy.

In early September 2021, during the qualifiers for the World Cup in Qatar, the Basel native turned into an impenetrable wall blocking the reigning European champion Italy, who had to settle for a 0-0 draw despite having dominated the field during the match. And online, he's been showered with praise, both tender and humorous, ranging from: "Sommer for president" to "for a Sommer Avenue in all Swiss cities".

Not surprised, historian Dominique Dirlewanger, author of The Swiss, explains this phenomenon while smiling about it: "In symbolic terms, in view of Sommer's achievements, we should even name Switzerland's cities' gates after him. There's nothing more emotionally charged than the role of the goalkeeper, the only and final bastion; this makes his appeal even stronger. In addition, Sommer has a very Swiss air about him, which makes it even easier for people to relate to him. He's as competent and friendly as he is modest – not unlike a certain fellow named Federer."

People who know him say it's hard to find a flaw in his character. At 32, Sommer has already served as the unwavering goalkeeper of Borussia Mönchengladbach, one of Germany's top clubs, for seven seasons. Far from the superficial flashiness of some footballers, the man who is also the heartthrob of their fans leads a well-ordered life with his family: Alina, a young German lawyer, and their two little girls, two-year-old Milla and Euros-baby Nayla. In contrast to the jetsetters, the Basel native's hobbies are cooking and playing the guitar. And to top it all off, he is, for those who know him, unflappably calm and unassuming.

"Yann? I've always liked him a lot," says Neuchâtel-native Steve Von Bergen, his former teammate on the national team. "Despite his playboy looks, he never steals the limelight. In the locker room, he is a leader, but always calm, who says things clearly but without getting upset. He has a calmness about him that he successfully passes on to the team." Michel Pont, the national team's former assistant coach, concurs: "Yann is really a great guy, an exemplary teammate who brings people together and is always in a good mood, while still knowing how to make himself heard when necessary. He's got an intense inner drive to beat out the competition."

Not long after the Euros, Sommer spoke to Blick with his legendary modesty about the Swiss team's fabulous path to the quarter-finals and his personal achievements. When asked about the win against France when trailing 3-1 with ten minutes to go, he explained: "There was a moment, in the field, when we all looked at each other and told each other that we believed in it, that we were going to give it everything we had!" Their sweat, blood and tears turned into magical moments:

We were very moved when we saw what was going on in the streets. It's a powerful feeling, seeing that an entire country is rooting for you.

As for his decisive role, he feels he has just done his duty: "As a goalie, you concentrate on the game, you don't try to shine, you just do your job." 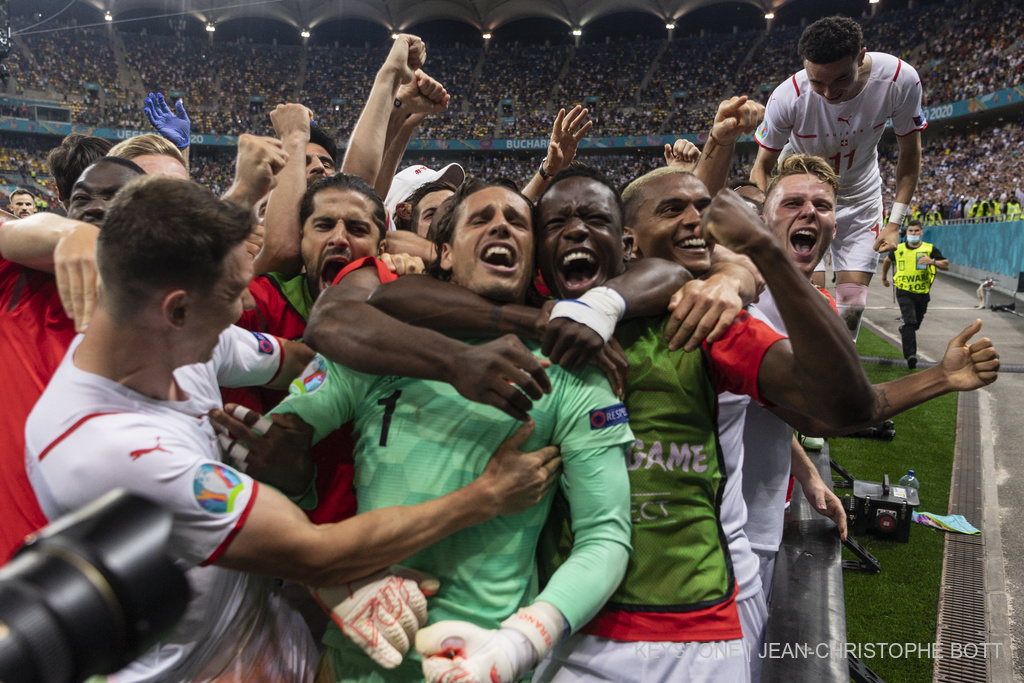 The golden boy of the Swiss team, as he is known, spent the first three years of his life in Aclens, near Morges, before his parents moved with him to the Basel region. From the age of four, when he started football school, he took on the position of goalkeeper, as his father and uncle had done before him. "Maybe it was a genetic predisposition; from my first training session, I've always wanted to be in goal. I wanted to catch the ball; I was born a goalie," he says, smiling. From 2010 to 2014, before joining the prestigious Bundesliga, he was part of FC Basel's golden age, crowned with four Swiss league titles and resounding victories over Bayern, Juventus and Manchester United.

A David among Goliaths

While the trend these days is to go with goalkeepers who are over 1.9 metres tall, like Neuer of Bayern and Courtois of Real Madrid, Sommer stands out as an exception – a David among the Goliaths. At 181 centimetres tall, he has managed to turn what is supposedly a handicap for this position into an asset. "Compared to other goalies, Yann makes up for being a bit shorter with his perspicacity, his positioning and his intelligence," says former national team goalkeeper Marco Pascolo of Valais. Joël Corminboeuf from Fribourg, who has also played for the Swiss team in goal, knows Sommer very well, having coached him on various youth teams. "Yann anticipates, he can sense what is going to happen. In one-on-one duels, like when the Italian player Berardi approached the goal area alone, Yann doesn't lunge forward; he creates a barrier with his body and is very quick on the ground. Facing him, strikers often find no solution. And he's a great guy, always eager to learn, very nice to be around." Pont adds: "Yann? He's a cat, very agile, with incredible muscular elasticity."

Another of Sommer's fortes is that he is as skilled with his feet as he is with his hands: he serves as an eleventh outfield player on the field, a contribution increasingly required of today's goalkeepers. He's able to throw the ball from the right and the left with great precision, without ever getting ahead of himself. "I like to be part of the game, to play an active role in the match," he says. His pal Von Bergen adds, amused: "It can be surprising when training to realise that the goalie – Yann in this case – has ball skills just as strong as yours." Sommer's serene demeanour is very reassuring for his teammates. As he puts it:

I have a fairly cool-headed temperament; I can step back and analyse my mistakes. I'm a perfectionist.

In this respect, he is inspired by another Basel celebrity, his friend Roger Federer. "I've always watched how he plays, how he manages to stay composed when under intense pressure. And he has remained humble despite his worldwide success."

Golden boy passionate about cooking and the guitar

In a poll shortly before the World Cup in Russia in 2018, Sommer was voted the Swiss team's most handsome player. And he does not shy away from modelling from time to time, as he did for L'Homme, a very trendy magazine in Germany, wearing a tight black T-shirt and Dr. Martens shoes. "Yann Sommer exudes the charm of those who do not seek to seduce," the magazine pointed out. While luxury watch companies usually choose actors or tennis players for their advertisements, considering footballers too plebeian, IWC Schaffhausen, one of the most upmarket Swiss brands, has chosen the Swiss goalkeeper as its ambassador. That does not surprise Thierry Brandt, a journalist specialised in this domain: "Yann Sommer has a very classy, elegant image, a bit like Federer. You can't imagine him kicking an opponent in the leg."

Off the pitch, cooking and playing the guitar allow him to "disconnect, to think about things other than football". For a long time, the golden boy shared his oven adventures in a successful blog called Sommerkocht, where he presented his favourite recipes, mainly vegetarian. The recipes conjured up the flavours of his childhood and the holidays spent in southern France with his parents: "I was born into a family of gourmets. I loved going shopping at the Provençal markets; the scents, the colours, the olive oil, the fresh ham, the truffles. But I'm just a simple amateur cook," he says, staying down to earth.

Thirty-two years old is a young age for a goalkeeper, so Sommer still has quite a few good years lying ahead. Top in the rankings, will he ever play for a more prestigious club? "I'm proud of my career," he answers. "When you're young, you've got a lot of dreams, but it's not always easy to make them come true. I did."