You don't have to go to Egypt to contemplate the pyramids: to see one you need go no further than the Niesen in the Bernese Alps – an almost perfectly geometric peak which has inspired many painters.

It isn't one of the seven wonders of the modern world. Nor is it even the most famous mountain in Switzerland: that accolade belongs to the Matterhorn, the undisputed icon of the Swiss Alps. And yet, the Niesen fascinates the crowds as it has captivated the imagination of many a painter. Some people have called it the highest pyramid in the world. And you can climb this one!

Emotion in all weathers

When you consider other more prestigious peaks in the Bernese Alps, such as the Eiger, Mönch and Jungfrau, the Niesen is a dwarf in comparison, reaching an altitude of just 2,360 metres. But standing at the gateway to the Bernese Oberland, towering majestically over Lake Thun, it remains etched on everyone's mind. Here, a number of elements come together to make all the difference: "This mountain has a perfect triangular shape that even a child can draw," says Beat Hächler, director of the Swiss Alpine Museum in Bern. And the fact that it stands detached from any mountain chain and is easily accessible to everyone reinforces the emotions one feels there, even in gloomy weather. The dreaded fog and clouds can be the bane of tourists in search of a stunning view. But as a local saying goes, when a crown of clouds forms around the Niesen's summit, it means the weather will be good. The climb to the summit – which takes between three and five hours – is not difficult for the average hiker, but it can be a bit scary. Even on a clear day, fog can envelop the summit in a matter of minutes, suddenly limiting visibility to about 15 metres. But this rarely lasts for very long: "It usually disappears quite quickly," says Bruno Petroni, author of a book about the mountain, Der Niesen und seine Bahn (the Niesen and its funicular). 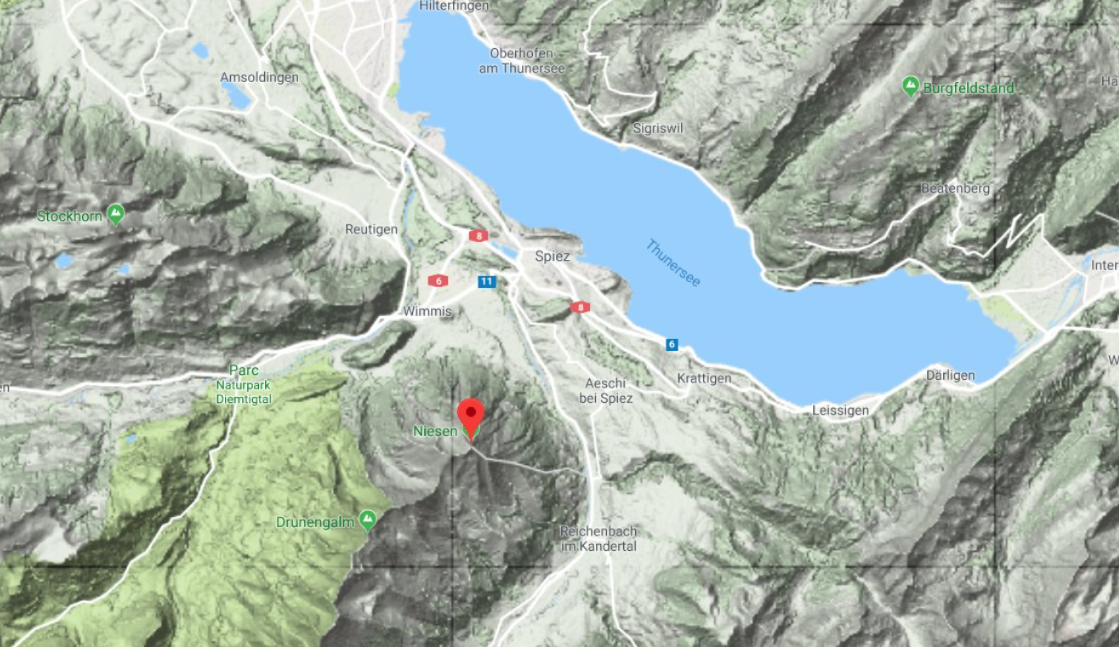 Reporter Bruno Petroni (56) is the great-grandson of an Italian stonemason and miner who, at the beginning of the 20th century, left his native Tuscany to emigrate to the Bernese Oberland, where, among other things, he built the route of the funicular, one of the steepest in Switzerland with a gradient of 68% in places. The construction took four years, requiring the manpower of up to 350 workmen. Completed in 1910, it brought one of the most magical panoramas in Switzerland to the wider public, with the French-speaking part of Switzerland and the Jura mountains to the northwest, and Lake Thun and the Alps to the southeast.

This timeless funicular is one of the attractions of the Niesen. Every year, it carries some 100,000 visitors to the hotel located at the top. It still operates along its original route with red cars fitted with rustic wooden benches. The 3.5 km route takes just under half an hour, passing through an intermediate station at Schwandegg. The exhilarating journey enables you to enjoy the dizzying heights of a wilderness untouched by winter tourism.

The longest staircase in the world

The slow pace belies the uniqueness of the place. Alongside the funicular runs a seemingly endless staircase – in fact the longest in the world, its 11,700 steps earning it a place in the Guinness World Records. Unfortunately, despite popular demand, it is strictly forbidden to use the staircase for safety reasons; the steps are narrow and the funicular could easily hit walkers. The staircase is only accessible during a competition in June, which attracts runners from a dozen or so countries.

The Niesen is also a paradise for paragliding enthusiasts. "Because of its isolated spot, it is the ideal mountain for long flights: it allows you to go in all directions depending on the wind," notes Petroni, a fan of the sport. It is no coincidence that the European record holder, Christian Maurer, started from the Niesen. After flying a distance of 330 kilometres, he landed in Austria.

The Swiss pyramid has also captivated the imagination of many painters: Ferdinand Hodler, Paul Klee and Cuno Amiet immortalised it in numerous paintings at the beginning of the 20th century. Hodler painted it about ten times, especially from the Kander valley. Klee was dazzled by it during a stay in Gunten on the lake. Amiet depicted it beautifully from Thun. Painters often illustrate the formidable contrast between the mountain and the water, this triangle of rock that seems to tumble upside down into the lake.

From dawn to dusk, the Niesen never ceases to fascinate. Maybe because you can climb it from five different places: Diemtigtal, Wimmis, Mülenen, Reichenbach and Frutigen. "Each time, it's a different mountain with different landscapes," says Petroni. That's the magic of this mountain.