A nation of railway enthusiasts: a history of the Swiss railways

Travelling over 2,000 kilometres per capita per year, the Swiss are among the world's keenest train travellers. With around 5,300 kilometres of railway lines, Switzerland has one of the most extensive railway networks in Europe. But why does this small, landlocked country have the world's densest transport network? What drove the Swiss to build railway lines at altitudes of over 3,500 metres? Let's go back in time to find out!

Key tasks include global marketing of Swiss public transport nationwide and the incoming ticket range, as well as the promotion of cross-border travel from Switzerland’s neighbouring countries.

The foundation stone for the construction of the Swiss railway system was laid abroad: by the time neighbouring countries had built quite advanced railway networks, Switzerland was still largely reliant on road traffic. The Strasbourg–Basel Railway Company set the ball rolling in 1844 by building a railway line from Strasbourg in Alsace to Basel. This spurred the Swiss to try to catch up. The first plans to build railways in Switzerland had already been made in the 1820s. Negotiations dragged on for over 25 years because of political instability and the cantons' conflicting interests. Merchants who saw in railways a means to transport goods at lower cost supported the project, while local trades- and businessmen who worried about competition from cheaper products brought in from other regions opposed it. The merchant lobby prevailed: the first rail line built exclusively on Swiss territory, the Swiss Northern Railway between Zurich and Baden, was opened in 1847. It was popularly known as the 'Spanish Bun Railway' (Spanisch-Brötli-Bahn), because Spanish buns from Baden's bakeries were a highly prized delicacy in Zurich.

The Federal Railway Act of 1852 set off a railway building boom. The small Alpine nation had caught railway fever. Railway lines sprang up like mushrooms in the second half of the 19th century. The Federal Act on the Construction and Operation of Railways on the Territory of the Swiss Confederation (1852) enabled private companies to build railways. New sections of the burgeoning rail network were built across Switzerland.

A long-held dream of building a rail line to link northern and southern Switzerland through the Gotthard Massif began to take shape. Supporters and opponents of the tunnel project were unable to see eye to eye, and competing proposals for where to locate the tunnel route and how to build it were the subject of long debates. The decision to build the Gotthard-Railway tunnel was finally taken when Alfred Escher, president of the Swiss North-Eastern Railway Company, declared himself in favour of the project. On 7 August 1863, two major railway companies and 15 cantons founded the Gotthard Association.

It was decided to build a continuous double-track adhesion railway* with a maximum gradient of 0.26%, a minimum radius of 300 metres, and a summit tunnel. Switzerland's neighbouring countries were to bear part of the construction costs because – as Escher was quick to stress – the new railway line would also greatly benefit them. International agreements were signed in 1871. A year later, a company owned by the Genevan engineer Louis Favre was awarded the contract to build the tunnel.

The Gotthard Tunnel project was a huge undertaking that faced numerous physical and financial obstacles. The contract Louis Favre signed contained exceedingly onerous terms. Besides the pressure to build the tunnel on budget, the working conditions were horrendous: temperatures of up to 40°C inside the tunnel, unstable rock strata, inadequate ventilation, and dynamite fumes that caused eye and respiratory tract diseases. In 1875, tunnel construction workers went on strike demanding better working conditions.
Construction delays almost doubled the costs of the project.  Favre and the Gotthard Railway Company squabbled over cost overruns, causing the company's shares to plummet and jeopardising the entire project. Fortunately, the German, Italian and Swiss governments stepped in with additional funds – for the Swiss government this was an obligation under the Federal Railway Act – and the project was carried through to completion.

Louis Favre never got to witness the moment when workmen from the Swiss and Italian sides broke through the final barrier of rock: he had died of a heart attack while inspecting the tunnel the previous year. But the workmen found a way for him to be the first to cross the tunnel nonetheless. When the bores drilled through the final layer of rock on 28 February 1880, the workmen passed a tin containing a photograph of Louis Favre through the breach. It was their way of celebrating this historic breakthrough and paying tribute to the engineer who had led their work. The tunnel's horizontal alignment was out by only 33 centimetres and the vertical one by 5 centimetres. In engineering and surveying terms, it was nothing short of a miracle for the time. They had built the world's longest railway tunnel (15 kilometres). The Gotthard Tunnel's grand opening in 1882 made headlines around the world as a great feat of engineering by the small Alpine nation. During the more than 130 years between the opening of the original Gotthard Tunnel and the completion of the 57-kilometre Gotthard Base Tunnel in 2016, the Gotthard Tunnel played an extremely important role in European passenger and freight transport. The history of Swiss railways would be inconceivable without the Gotthard Tunnel.

Swiss railway pioneers had a long-cherished ambition of building a railway line to the 4,158m summit of the Jungfrau. The challenge was enormous, as the route to the summit was made impassable by year-round ice and snow. In 1811, the brothers Jérôme and Rudolf Meyer were the first to ascend the Jungfrau, laying to rest the myth that it was unconquerable. Their feat paved the way for the construction of a series of cog railways at the end of the 19th century. We now know that the completion of the Jungfrau Railway would mark the peak of Switzerland's railway construction fever.

"Now I've got it!", exclaimed the industrialist Adolf Guyer-Zeller one Sunday in 1893 while hiking with his daughter. He had just seen a train travelling up to Kleine Scheidegg. That night he sketched his idea on a sheet of paper:  building a railway from Kleine Scheidegg to the Jungfrau.

Just under four months after that auspicious Sunday walk, Guyer-Zeller submitted a licence application to the Federal Council. The ground-breaking ceremony took place on 27 July 1896. It took 24 long months of arduous labour – not three, as originally planned – to complete the first section. The delay was in hindsight hardly surprising, considering that the only tools available were shovels, pickaxes and muscle power.

Another setback – and perhaps the most significant – was Adolf Guyer-Zeller's death in 1899. His passing put a question mark over the entire project. But his heirs were determined to continue his work. Securing funds to continue the work proved difficult, the rock face resisted every hammer strike, and the labourers worked under extremely hard conditions. Work progressed slowly. The management ultimately decided to rework the original plan to build a railway line all the way to the Jungfrau summit and redesignated the Jungfraujoch, at an altitude of 3454m, as the new terminus of the Jungfrau Railway.

In 1912, 16 years after work began, a festooned train carrying a group of passengers invited especially for the occasion made its maiden journey up to the Jungfraujoch – which remains Europe's highest railway station to this day. Today's climbers and day-trippers find signs and commemorative plaques bearing witness to the feat of engineering achieved at altitudes above 3,500m by the men who built the Jungfrau Railway over 100 years ago.

The journey into the 20th century

At the end of the 19th century, the Swiss electorate were called to vote in a referendum on whether to nationalise the railways. They gave a clear verdict: Switzerland's railways were to belong to the Swiss people. This popular decision led to the creation in 1902 of the Swiss Federal Railways (SBB), which would absorb five big and a number of small railway companies within a few years.

Switzerland was an early pioneer in the electrification of railway lines. Coal for steam engines was in short supply during the First World War. When the Second World War broke out, renewed coal shortages prompted the large-scale electrification of the SBB network. Rail electrification continued apace after the war. The last SBB steam locomotive was retired in 1967. Since then, the entire Swiss railway network has been solely powered by electricity. At the time, this was pioneering stuff! 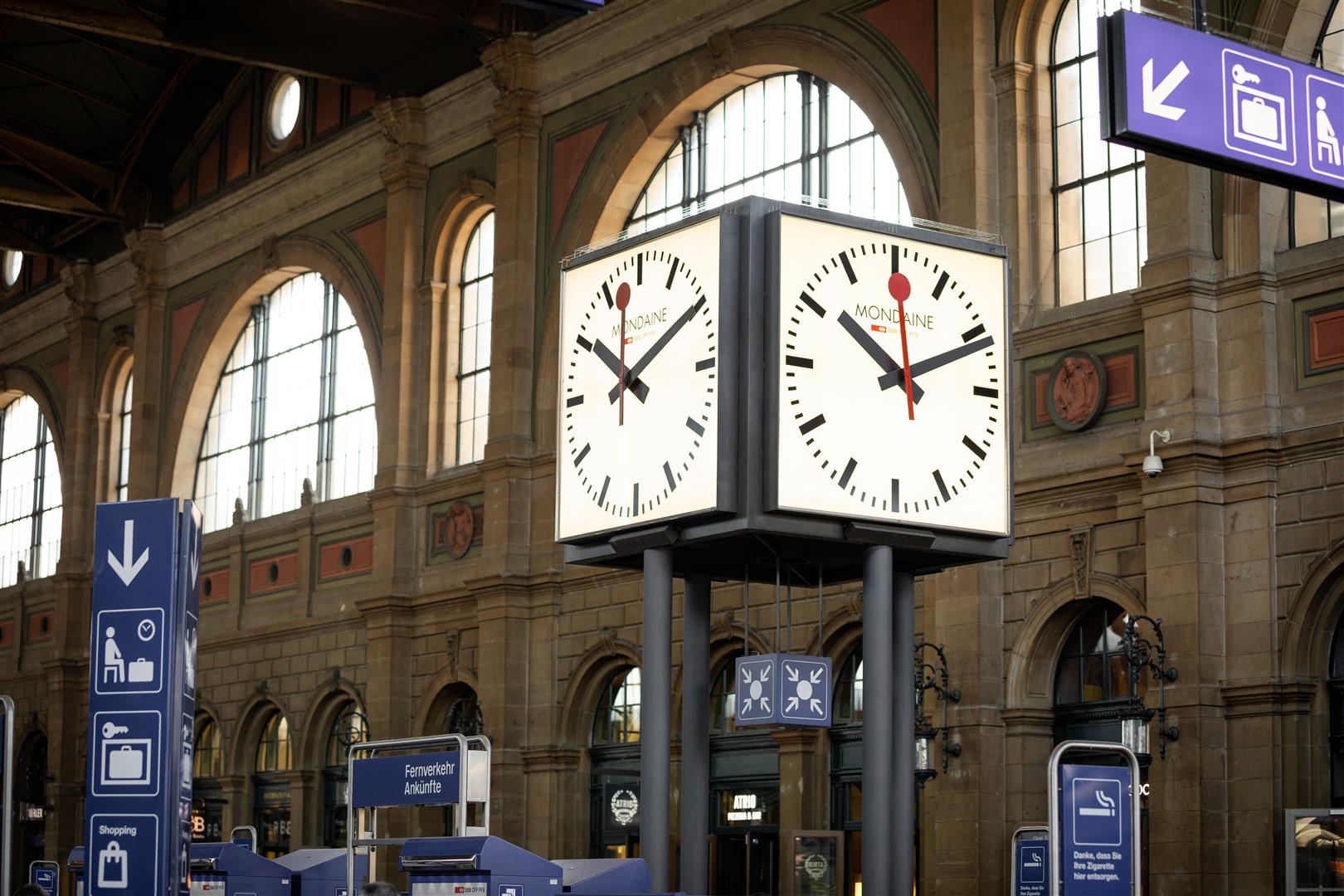 In the 1960s, integrated fixed regular interval timetables began to be introduced in parts of the Swiss railway network. Under an interval timetable, trains arrive and depart each station at the same minute after every hour or half hour, guaranteeing regular, recurring connection times. Experts had long argued that a nationwide interval timetable, like the one that had been in place in the Netherlands since 1934, was not feasible for Switzerland. History would prove the experts wrong: Samuel Stähli, a Bernese civil engineer and keen railway enthusiast, founded the Madcaps' Club (Spinnerclub), a group of railway enthusiasts who met every Monday evening to try to devise an interval timetable for the entire Swiss railway network. They dispensed with conventional graphical timetables and decided to draw up an interval timetable based on topographic network maps. Their system worked: in March 1969 they submitted a 19-page report on their timetable, which they presented at a professional symposium in 1972. They won over the SBB management, which set up a larger working group to develop a more detailed timetable that would be put into daily service. In 1982, the SBB announced: "Your timetable is our timetable – your SBB". Since then, Swiss trains have departed at least once an hour for destinations across the length and breadth of the country. The introduction of the integrated fixed interval timetable brought an extraordinary expansion of railway services.

Rail 2000 is without a doubt the largest Swiss railway project of modern times. The Swiss electorate endorsed the project in 1987, firing the starting shot for 130 construction projects. Rail 2000 is designed to reduce travel times between all of Switzerland's hub stations to just under one hour. Trains leave the main stations just after the hour and the half hour to reach their destinations at other hubs just before the hour or half hour, with the main stations functioning as 'transport spiders' in a complex system of railway hubs. This ensures well-coordinated rail connections and shorter waiting times between trains. The stated aim of Rail 2000 was to make trains more frequent, faster and more comfortable. The project led to more direct connections between stations and higher speeds throughout the rail network. A large number of rail lines and stations were upgraded or newly built, reducing travel times to under an hour on the main routes. The new Rail 2030 project aims to add new hubs, continuously reduce travel times and increase passenger capacities.  In 1958, the SBB began advertising its services with the slogan 'those with brains take the train' – which is as true today as it was then.

*Adhesion railways rely solely on adhesion traction between the wheels and rails to move a train.

A clear run for Swiss slalom

Drug checking – the Swiss response to the risks of drug use