Five hundred years ago, Swiss soldiers were recruited into the Papal army for their loyalty and fighting qualities. Since then, the Swiss Guard – known today for its professionalism and discipline – is entrusted with the task of ensuring the safety of the Pope. The outward appearance and the mandate of the traditional Swiss Guard have not changed over the years. By contrast, their training and equipment have been constantly updated to meet new challenges.

The Swiss Guard – which is also known as the world’s smallest army – has been in the service of the Pope in the Vatican for more than 500 years. The contingent was increased from 110 to 135 in 2015 in response to increased demand for their services. The Swiss, together with the Pontifical Gendarmerie, are responsible for ensuring the safety of the Pope both within and outside the Vatican and for accompanying Pope Francis, who enjoys contact with people, on all his public engagements.

In addition to the security service, the Swiss Guard’s tasks include ceremonial duties, such as that of guard of honour at receptions and audiences. Nevertheless, the work of the Swiss Guard, who wear very a colourful uniform, is by no means simply that of being on show. In the event of an emergency, the halberd-bearers must make the right decisions to protect the Pope.

Swiss soldiers are considered invincible owing to their courage, noble intentions and loyalty. Nowadays, the Guard carries out its duties under the motto ‘Acriter et Fideliter’ which translates into English as ‘fiercely and faithfully’. It comes as no surprise therefore that back in the 16th century the Pope entrusted Swiss mercenaries with his protection. According to the Swiss ambassador to the Vatican from 2014 to 2018, Pierre-Yves Fux, the Swiss were recruited also for their loyalty and fighting qualities. 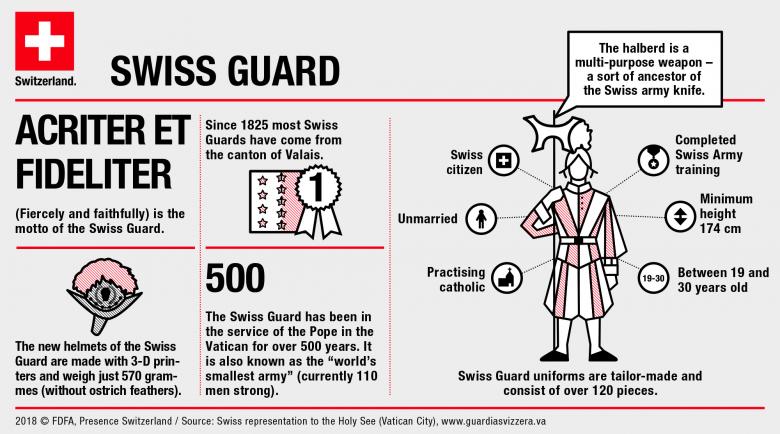 The Swiss Guard was officially established on 22 January 1506, the day on which 150 Swiss soldiers from the canton of Uri marched to Rome and entered the Vatican for the first time, where they were blessed by Pope Julius II. The traditional swearing-in ceremony for new recruits takes place every year on 6 May. On the same day in 1527, 147 Swiss Guards lost their lives protecting Pope Clemens VII during the Sack of Rome.

How to become a Swiss Guard

Strict preconditions must be fulfilled: in addition to having completed Swiss military training, a candidate must be a practising Catholic and be at least 174cm tall.    When one sees the stoic calmness and professionalism with which the Guards carry out their duties, it is immediately clear that in addition to the formal requirements, virtues such as discipline, respect and professionalism are also required. The recruits are prepared and trained both in Switzerland and in the Vatican for their tour of service, which lasts for at least two years.

With their unmistakeable uniforms, the Guards breathe life into the historic setting of the Vatican, which is a UNESCO World Heritage site. The brilliant yellow-blue-red Renaissance uniforms complete with helmet featuring a crest of brightly coloured feathers are still worn today. For training, during night duty, and on weekdays at the St Anna entrance, however, the Guards wear a simpler blue uniform.

The Swiss Guard yesterday and today

Today, this traditional uniform is worn by well trained young Swiss men, thus perpetuating a tradition that has been practised for over 500 years. Like the mercenaries of the 16th century, they share the willingness to put their lives at the service of the head of the Catholic Church. The Swiss Guards also distinguish themselves with other values such as reliability, loyalty and a strong sense of duty, which are still essential for their day-to-day work.

The tasks and outward appearance of the Swiss Guards have not changed over the years. Their equipment and training, on the other hand, must be constantly updated to meet new challenges and keep the world’s smallest army up with the latest developments in security techniques at all times. In addition to the swords and halberds traditionally seen in photos, the Swiss Guards have tear gas and firearms at their disposal for use in emergency situations.

The formula for success: tradition and innovation

New technologies are also being constantly developed for the Swiss Guard. Some of the soldiers have been issued with new helmets made with 3D printers by a Swiss company. The new helmets, weighing 570 grammes, are somewhat lighter and more comfortable to wear than the metal model dating from the 16th century.

This combination of innovation and tradition, for which Switzerland is well known in other areas too, characterise the ongoing commitment of the Swiss to the security in the Vatican, according to Pierre-Yves Fux. He went on to say that the formula for success – which has ensured the long-standing existence of the Swiss Guard – is the unwavering preparedness to further develop and improve, while maintaining the essentials.

The Pope traveled to Switzerland on 21 June 2018, where he was accompanied by a detachment of the Swiss Guard.