A little over twenty years ago, on 31 October 2000, the UN Security Council unanimously adopted resolution 1325. With this pioneer resolution, the Security Council recognized for the first time that women’s active and meaningful involvement in political and security decision-making processes is linked with building sustainable peace and security. Two decades later, the implementation of the Women, Peace and Security agenda is slow to progress. As women are at the forefront in responding to crises in their communities and building dialogue and trust in times of conflict, they tend to be excluded from shaping the future of the societies they live in. Switzerland has a long history of engaging in the resolution of conflicts and is a trusted partner in peacebuilding. How are women included in these efforts? Four women working in this field in various roles share with us their views on women’s participation in peace processes.

The numbers paint a sober picture: according to the think tank Council on Foreign Relations, between 1992 and 2019, women constituted 6% of mediators and 13% of negotiators in major peace processes. The more recent years saw a slight improvement. Between 2015 and 2019 the proportion of women mediators moved into the double digits with 11%, while the percentage of women negotiators increased slightly to 14%. However, women’s inclusion goes beyond official negotiations. An inclusive peace process will have formal and informal spaces that can capture the perspectives and experiences of wider segments of the population, including civil society and women peacebuilders.

Christine Schraner Burgener is a Swiss diplomat with 30 years of experience on the diplomatic stage. Since 2018, she acts as the UN Secretary General’s Special Envoy on Myanmar. Transitioning from an ambassador’s role to the role of a mediator almost seemed like a natural development. In 2010, when deadly violence erupted in Thailand, Schraner Burgener, took initiative. As the Swiss Ambassador in Bangkok, she was well-connected and trusted by the parties. This enabled her to initiate and lead, with the backing of Bern, a five-year mediation process between the two sides in her residence. Being a women was never an issue in this context. “In Asia it is different than in Europe. It does not matter whether you are a women or a man, the position is important. In Thailand, people assume you deserve the position you have and respect you for it” she says. In Europe, it is still seen as extraordinary for women to be in leadership positions previously occupied by men. The Swiss media was quick to point out that Schraner Burgener was the first woman to head the Swiss embassy in Berlin after she left Thailand.

Of course, I was the first woman, but it should be normal.

Mô Bleeker, Special Envoy on Dealing with the Past and Prevention of Atrocities in the Federal Department of Foreign Affairs, shares a similar perspective as a mediator.

Parties tend to be respectful to women with a formal role.

Bleeker spent twenty years of her career advising conflict parties and participating in peace processes, among others in Columbia and the Philippines, on one of the thorniest questions in peace negotiations: how to address serious human rights violations and atrocities committed during war. Until the late 1990s, justice and peace were seen as opposites. Mainstream mediators advocated to first work on securing ceasefires and left accountability to be dealt with—if at all—at a much later stage. A shift took place with the creation of the International Criminal Court in the early 2000. Soon after, the UN declared it would not endorse peace agreements that failed to address impunity; blanket amnesties for serious violations of international law were not acceptable anymore. “At this time, there was still a generation of mostly older, western and male mediators, who had never dealt with accountability in a peace process, or only through amnesties” she explains. It was an arduous journey to introduce transitional justice in peace negotiations and expose the parties to this crucial issue at an early stage of the process.

While women mediators are often well accepted by the parties, they often find themselves underestimated, particularly by western colleagues. At the same time, “when you act under the radar, you can make things happen that no one believed you could. For example, establish access to the chief of the army or go to risky places for confidential talks.” explains Schraner Burgener. “Or, I can visit the Rohyngias in Bangladesh and have a frank conversation with the women about their situation. A man would not be able to do this because of cultural norms” she adds. Furthermore, social competences and a respectful attitude are key for a mediator, together with being authoritative and sharp on the negotiation topics when needed. A mediator needs to place the process before personal career ambitions. “The success belongs to the parties, it is not for yourself, it is for the people on the ground” confirms Bleeker.

Including women’s voices into the process is also an essential element of leading negotiations. “As the Special Envoy on Myanmar, I purposefully created a women’s network that advises me on various topics and I meet with them regularly” says Schraner Burgener. She then also supports the women from the advisory network to advance the conclusions reached during their meetings. Nowadays, the Women, Peace and Security agenda is part of a peace process.

…To Peace Practitioners in the Field….

The state of South Sudan was created in 2011 following decades of civil war. In its peace- and nation-building efforts, the new state is supported by Switzerland, including through the work of Lydia Minagano, National Program Officer and Joane Holliger, the Swiss Human Security Adviser in Juba since 2018. The two women are engaged in strengthening civic participation in the reconciliation process, supporting youth and their contributions to the implementation of the 2018 peace agreement and enabling dialogue to strengthen peaceful coexistence and social cohesion.

Joane Holliger is used to working with men in leading positions. “Once they see that you can bring value and input, that you are not shy and stand your ground, they respect you as a woman” she says. It is also helpful that Switzerland enjoys a good reputation in South Sudan, having supported the Comprehensive Peace Agreement in 2005 that led to independence. At the same time, the men are not as open to work with South Sudanese women as they are with foreign women. In the 2018 peace agreement, civil society and women activists fought for and achieved to secure a provision allocating 35% of positions in government institutions to women. But this has not yet happened. “When we are talking about women’s participation and enabling women to claim their seats at the table, we are also challenging some of the norms and beliefs in our society” explains Minagano.

We are dealing with people in the political space who are socialized to believe that women are not supposed to be in this space.

The political parties also face the challenge that they simply do not have sufficient women party members. Some parties managed to appoint women who competently assumed their new positions. Others only aim to tick the (gender) box and chose women they think will further the interests of individual party members. “Patriarchy is a system that favors men but instrumentalizes women to support it. This has a negative impact on women’s empowerment. Women had to work hard for the 35% provision. When the parties end up occupying the spaces with women who are not up for the job, it portrays a negative image of what women are capable of” adds Minagano.

When it comes to social reconciliation, in Holliger’s experience, women are often more reasonable than men in dialogue processes and are constructively searching for solutions. Men are more likely to insist on their positions and threaten to go to war, while women tend to search for ways to break the cycle of violence. This is not because women are more peaceful than men. Rather, “it is women who mostly carry the burden of war. They have many grievances. They lost husbands and children, or were victims of sexual based violence. And still, they are the ones who make society function” says Holliger. In this sense, bridging the gap between women civil society and the political space could strengthen peacebuilding efforts. “Women should use their civil society experience as a ladder to lead them into the political space”, says Minagano

…To a Swiss Initiative

On 8 March 2021, the FDFA launches the “Swiss Women in Peace Processes” Network (SWiPP). The network will connect 15 Swiss women working in peace processes, be it for the FDFA, non-governmental entities or international organizations. Through exchanges with mediators and experts, but also through peer-learning, the SWIPP will provide a platform for women to network, develop professionally and heighten the visibility of Swiss women working in peace processes. Voices from SWiPP participants can be found here. 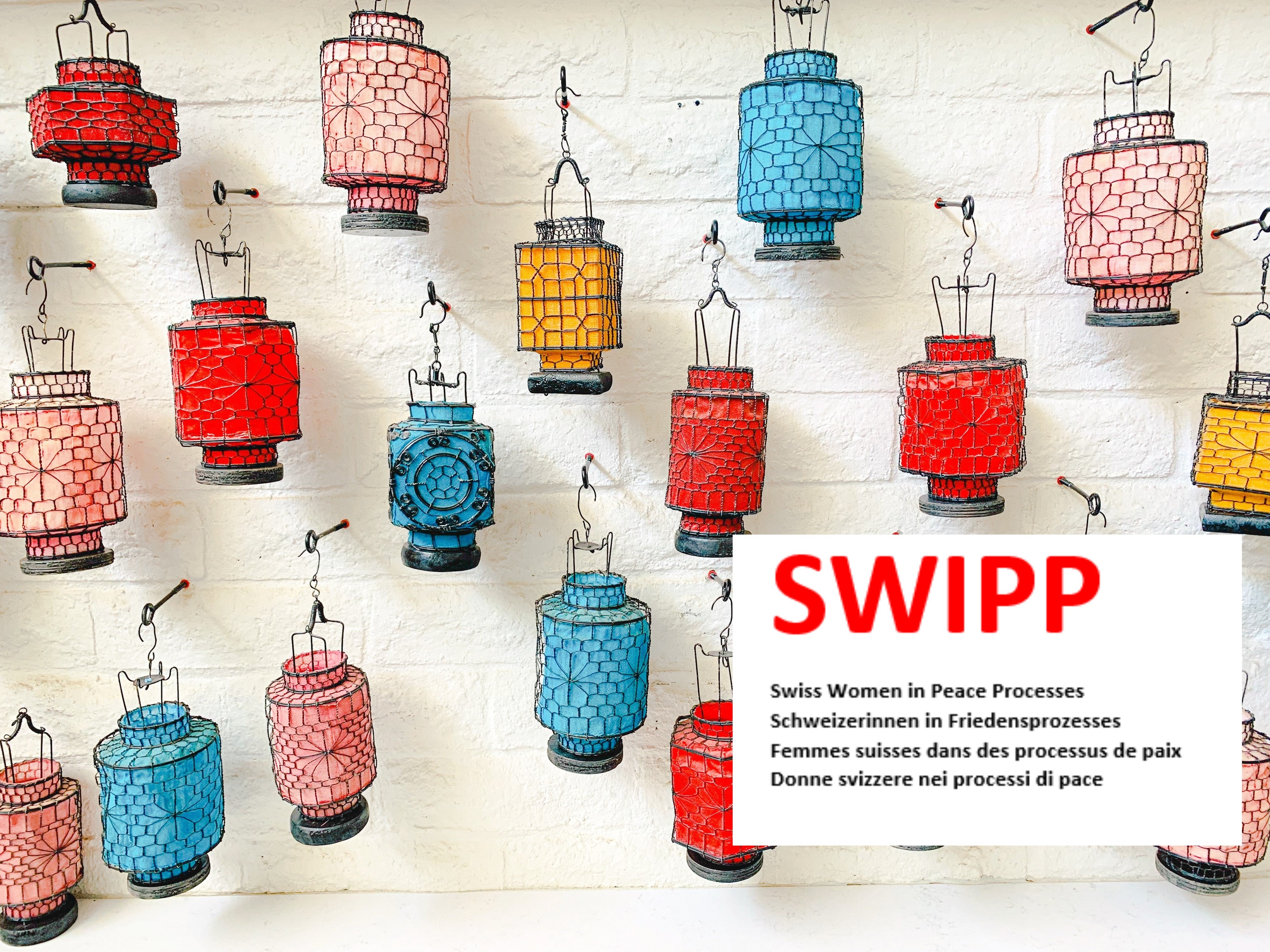 A woman who observes, listens and forges ahead

KT Gorique: the Swiss artist taking the world of hip-hop by storm