In Switzerland, 'hello', 'goodbye' and 'thank you' come in four languages! There are as many traditional dishes as there are cantons, and just as many ways to celebrate spring, winter, the descent from the mountain pastures (the Désalpe) and other festivals. With no shortage of culinary delights, things to discover and festive events, Switzerland is a great place to live.

Here are a few suggestions to help you find some of our country's attractions off the – rustic, rural or mountain – beaten track, because there is more to Switzerland than just clocks, cheese, chocolate and skiing!

The city of Calvin has a reputation for being austere and a little too sensible, but nothing could be further from the truth. Every year between 9 and 11 December Genevans celebrate carnival a little ahead of schedule. In various disguises and costumes, they commemorate the assault against the Savoyard soldiers that took place on the bleak but triumphant night of 11 December 1602. Those brave enough attempt the famous Course de l’Escalade race, which takes place the first weekend of December – not to mention the (serious) procession to commemorate the Escalade!

On the first weekend of December, you'll find the people of Fribourg/Freiburg gathered outside the city cathedral to listen to a speech given by St Nicholas, the city's patron saint and protector of children. The speaker looks back on the events of the past year, recalling funny and satirical stories to amuse the audience. Once the official part is over, the crowds head over to Collège St-Michel to try out a festive spread – and there is no taking it easy here!

Before crossing over the röstigraben – the name given to the imaginary divide between the French- and German-speaking parts of Switzerland – to go forth on our festive wanderings, let us make a short stop in the Jura at a place called Saignelégier. This is where horse enthusiasts converge, in the height of summer. The tradition of the horse show has existed since the 19th century and it has become THE place to exhibit thoroughbred horses and their prowess – whether bareback, at a trot, gallop or pulling a Roman chariot. Keep your eyes wide open and you won't be disappointed with this trip!

Change of scene and ambience: at Bern's autumnal market, it is not horses but onions that play the title role. Onions of all colours and sizes – in braids, clusters, red, white, and even wrapped up as sweets for the food lovers among you! Bernese farmers sell up to 10 tonnes of onions at this annual event.

The people of Basel like to say: "The best three days are when it's carnival." Venice – beware! Because Basel has the largest carnival in Switzerland.

Drummers, flautists, brass bands (known as guggenmusik to insiders), floats and carriages parade in the city centre. Creating a colourful hullabaloo, thousands of individuals disguised in incredible costumes and carrying lanterns make for one of the greatest shows to be seen. Early birds and night owls are advised to be there for the start of the festivities when the parade kicks off at 4 o'clock in the morning. Pure magic...

The high point of this traditional festival celebrated in Zurich on the 3rd weekend of April is the burning of an effigy of Old Man Winter. Originally, the Böög was an unpleasant masked character who frightened children during carnival.

The straw effigy sits on a bonfire and the length of time it takes to burn heralds what kind of weather the summer will bring: the quicker the Böög burns, the greater the hope of a warm summer!

Wrestling is not a sport for brutes

Do hot temperatures, sawdust and hessian breeches get your heart racing? Then the Swiss wrestling festival in Schwägalp is just for you! Immerse yourself fully in the heart of Switzerland and discover one of the country's most popular national sports. Welcome to Lucha Libre Swiss-style! 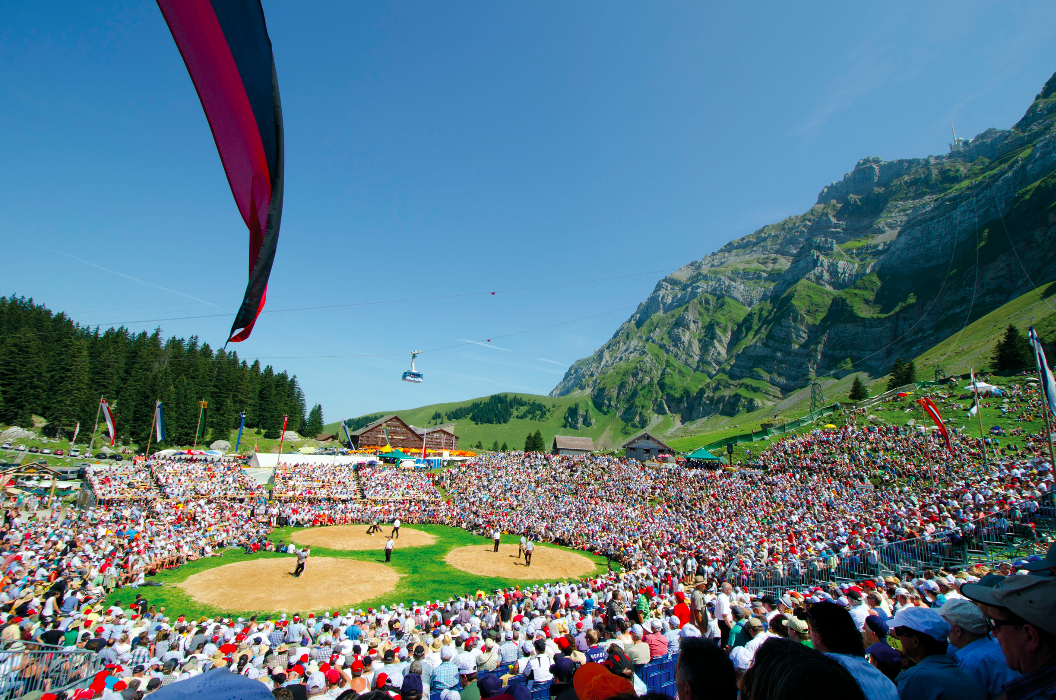 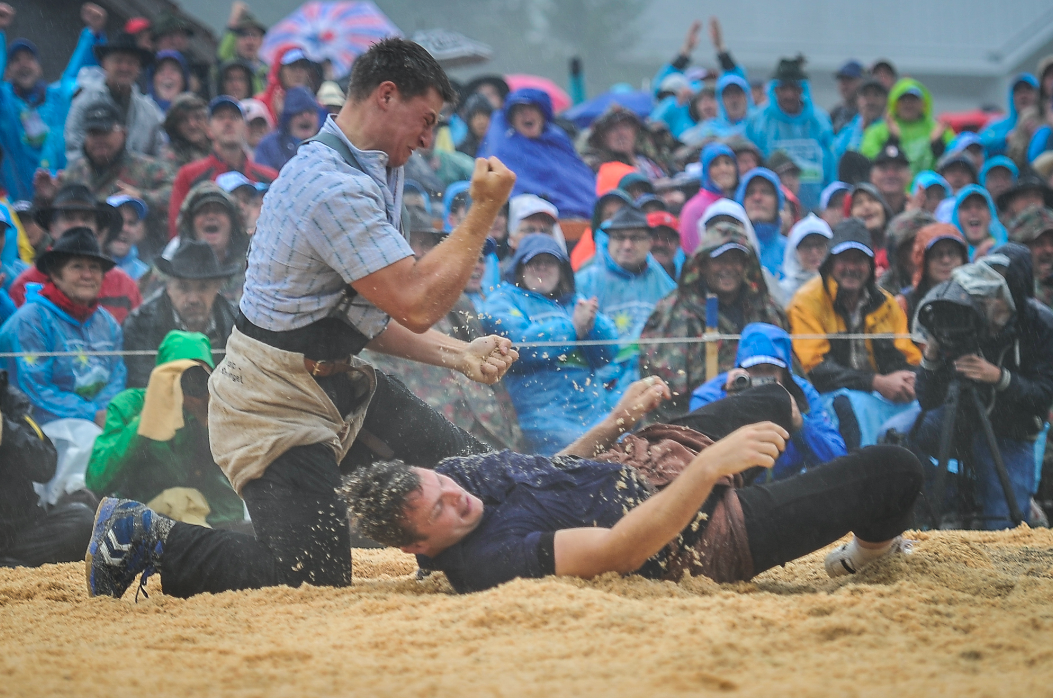 Igniting the dance floor in Appenzell

In the mountain pastures of Appenzell it's time to celebrate! No need for an elaborate light show however: the people of Appenzell can ignite the countryside dance floor in broad daylight, with the sounds of the violin and double bass playing into the night until the early hours of the morning. They whirl and twirl until dawn, using pantomime to evoke the highs and lows of married life and display scenes of courtship – a veritable match for any flamenco performance!

A cow wouldn't find her calf there

Between mid-September and mid-October, beautifully adorned cattle descend from the Alpine pastures of Engelberg, their bells ringing in concert. The Désalpe is a great way to start the autumn season, and the festivities continue with two major events – the Engelberg livestock fair and an open-air mass.

Yodelling that can melt ice

To complete our tour of Switzerland with music, let us travel to a setting worthy of Heidi right at the start of the month of July. With its green meadows, babbling brooks and buttercups in full bloom, the picturesque paradise landscape of the Bachläger alpine pastures in Grindelwald (as long as it doesn't rain!) plays host to the most seasoned yodlers all trying to out-yodel each other – a wonderful traditional event to start off the summer.

And now you know everything, it's time to take part!