To brighten up those long winter evenings, what better idea than to organise a fondue party! You haven't tried it yet? Then read on to discover the delights of this dish, which is emblematic of Switzerland.

Think of Switzerland and you think of mountains, chocolate, cuckoo-clocks, watchmaking and . . . fondue! Since its invention in the 1930s, this cheese-based dish has become a strong element in Switzerland’s identity. You can either make it from scratch yourself, or you can buy a ready-mix from shops or supermarkets. But first make sure that you have all the necessary equipment and utensils!

The word fondue is the (feminine) past participle of the French verb fondre (to melt), used here as a noun. It first appeared – in a culinary context – in 1735, in Vincent la Chapelle’s Le Cuisinier moderne, and was first used in the English language in 1878.

Origin of the recipe

The earliest known recipe for the modern form of cheese fondue comes from a 1699 book published in Zurich under the name Käss mit Wein zu kochen (cooking cheese with wine). This calls for grated or diced cheese to be melted with wine, and for bread to be dipped in the resulting mixture.

However, from that point until the late 19th century the name 'cheese fondue' referred to a dish made with eggs and cheese, as in La Chapelle's 1735 Fonduë de Fromage aux Truffes Fraîches. This resembled something between a cheesy version of scrambled eggs and a cheese soufflé. In fact, the celebrated gourmet Brillat-Savarin wrote in 1834 that "it is nothing other than scrambled eggs with cheese". 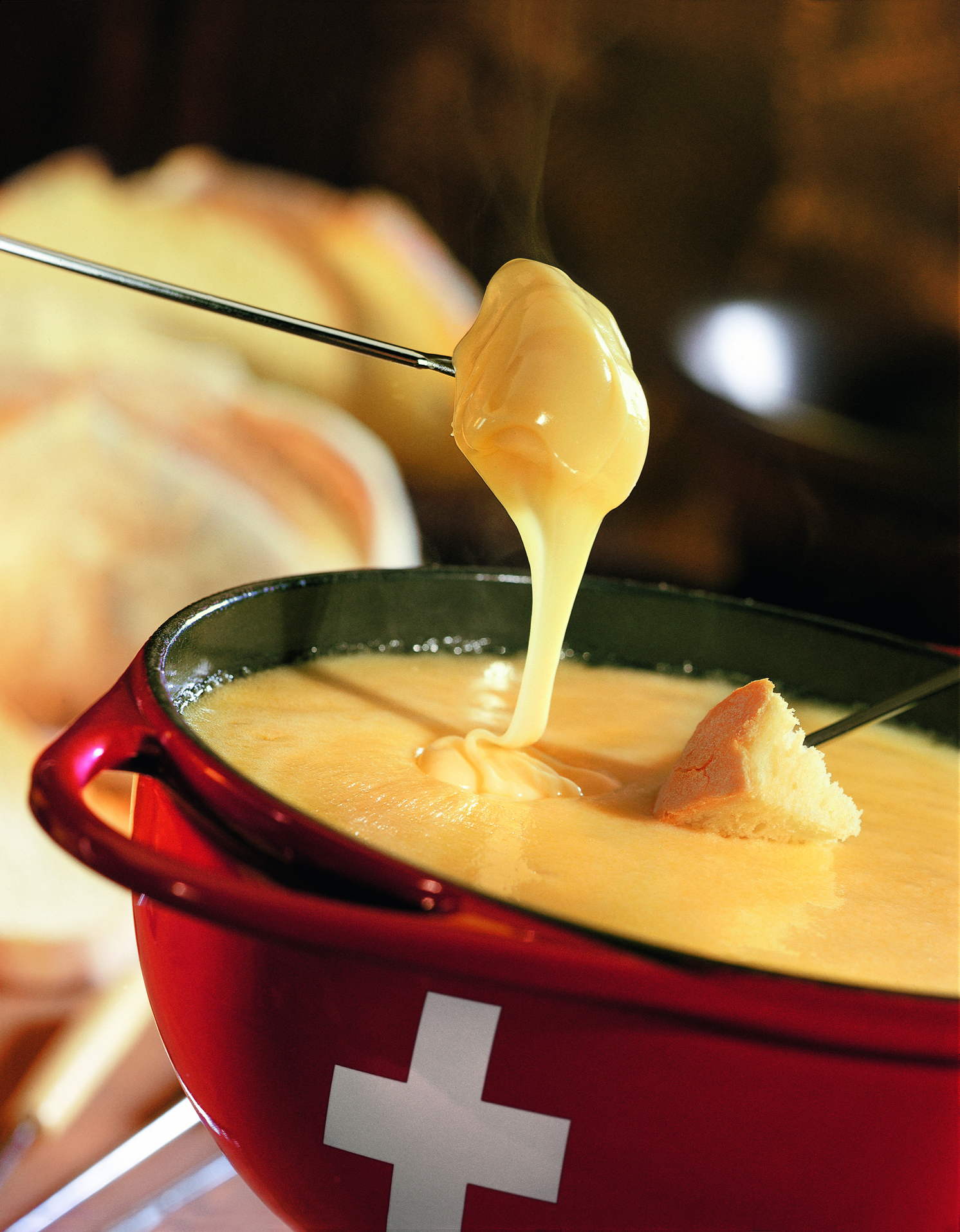 Although most of the earliest recipes for fondue were published in France and Belgium, they stipulate that Gruyère cheese should be used, so the Swiss deserve credit for its invention. However, it's also a popular dish over the border in Haute-Savoie.

Advent of the modern fondue

Fondue was popularised as a Swiss national dish by the Swiss Cheese Union in the 1930s as a way of increasing consumption of dairy foods. This melted cheese dish, including wine and kirsch (cherry brandy), is served in a cast-iron communal cooking-pot (caquelon) over a portable stove, heated with a spirit-fuelled burner. The diners then dip bread or slices of jacket potato into the mixture using long-stemmed forks: these usually have a coloured dot on the handle, so that each person can recognise his or her fork.

Purists would insist that there's no need for accompanying dishes, but if you really want to create a fondue feast, you can add side-dishes like broccoli, cauliflower or carrot sticks that can also be dipped in the cheese. As a final touch you can provide garnish consisting, for example, of olives, dried tomatoes or pickles.

How to make a fondue – the essentials

Traditionally, the cooking-pot is first rubbed with a cut garlic clove, and white wine is added and heated with cornflour. The grated cheese – usually Gruyère, or a mixture – is then added and gently stirred until fully melted. 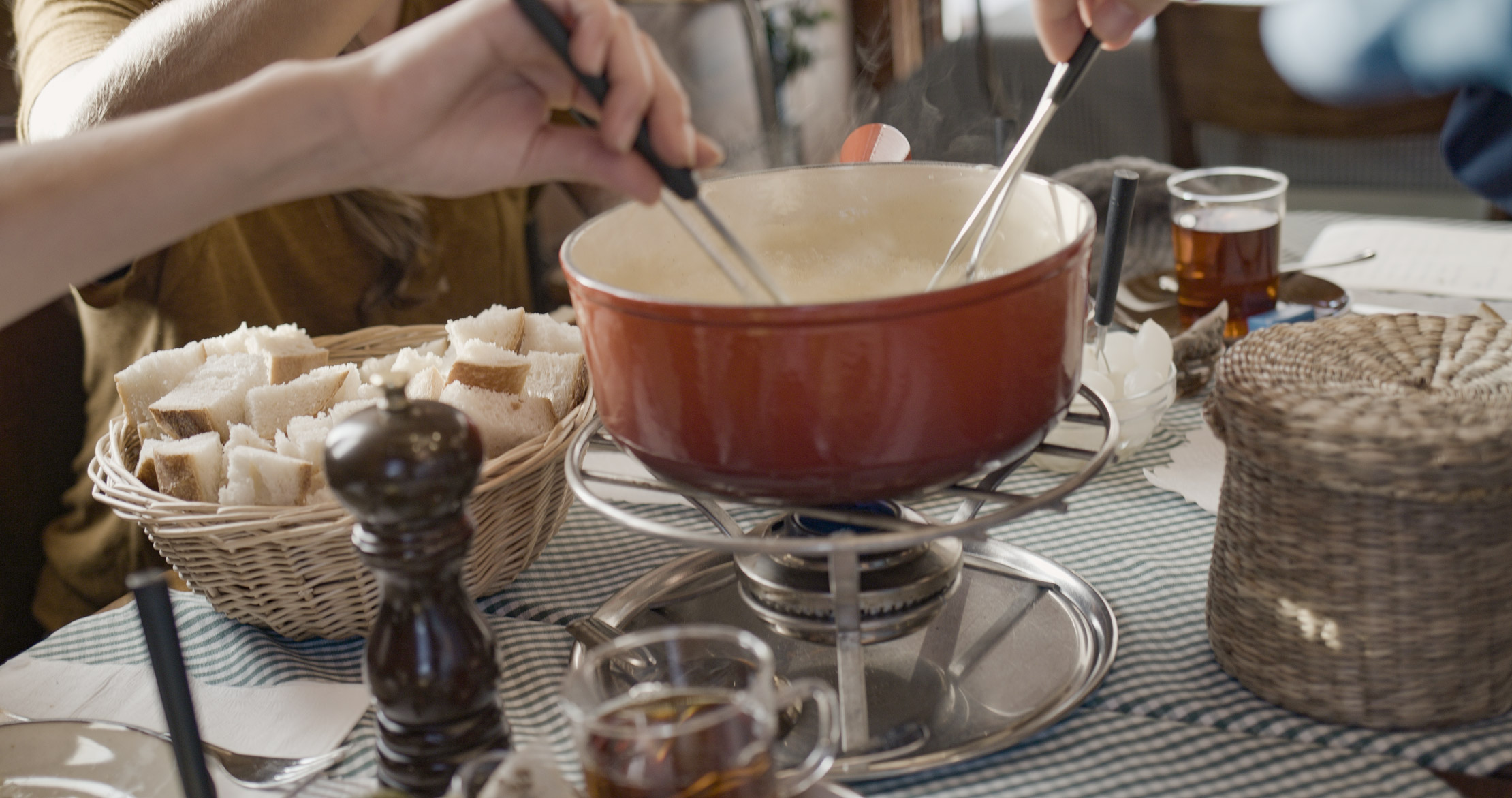 Some cherry brandy is often added, while the cornflour stabilises and thickens the mixture. Additional wine can be added if the fondue is too thick, as its acid and ethanol reduces the fondue's viscosity. The mixture may curdle if the protein separates from the fat: this is usually the result of insufficient liquid, or a low level of acidity, so lemon juice is sometimes also added. It's important to stir the mixture regularly to maintain the right consistency.

The crust or la religieuse

A cheese fondue mixture should be kept warm enough to keep the fondue smooth and liquid but not so hot that it burns. If the correct temperature is maintained until the fondue is finished there will be a thin crust of toasted cheese at the bottom of the caquelon. This is called la religieuse (French for 'nun'). It has the texture of a waxy cracker and is usually lifted out with a spatula and eaten.

This variant features two ideal fondue cheeses from the Swiss canton of Fribourg – Gruyère and Vacherin – and features a pinch of cayenne pepper to spice things up a bit. The two cheeses have the AOP (protected designation of origin) label, and this guarantees a fondue of superb quality. It's usually accompanied by a dry white wine, such as a Chasselas. However, to aid digestion you can also make a herbal infusion, for example fennel tea.

Since the 1950s, the term "fondue" has been broadened to include other dishes in which a piece of food is dipped in a liquid mixture kept hot in a cooking pot. These include fondue bourguignonne or fondue chinoise, in which pieces of meat are cooked in hot oil or broth and served with savoury sauces, and chocolate fondue, where pieces of fruit or pastry are dipped into melted chocolate. 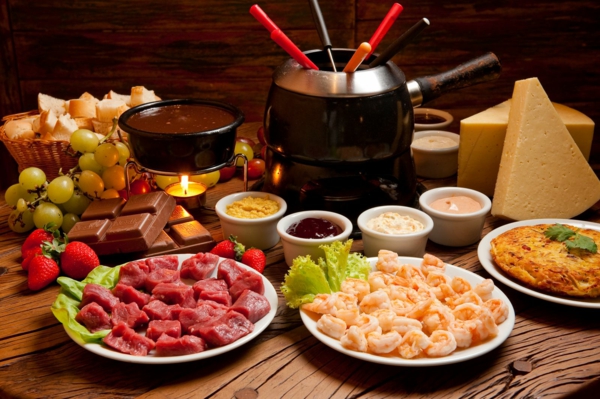 A mention of fondue in Asterix in Switzerland

In this comic book, based on the exploits of the little warrior from Gaul, the fondue party is livened up by the introduction of a ritual whereby anyone who loses their piece of bread in the fondue has to pay a forfeit. The party culminates with the unfortunate individual – who has lost his piece of bread for the third time – being thrown into Lake Geneva with weights attached to his feet. This is unlikely to happen to you, as in real life the forfeits are distinctly mild in comparison!