The heritage cheese from Muggio Valley

The art of making Zincarlin dala Vall da Mücc is an ancient one. In Ticino's Muggio Valley, the recipe for the heritage cheese has been handed down from one farming generation to the next. But it nearly disappeared overnight. Here is the story of its revival.

Salorina, a small commune in the Mendrisio district of southern Ticino, is home to the last remaining maturing cellar for Zincarlin dala Vall da Mücc – a cheese traditionally made in this valley. "In the olden days, each farmer here had their own cellar storing all manner of produce – cheese, corn, potatoes, chestnuts – in order to feed their own family. Our cellar in Salorina is kept at a constant temperature all year round thanks to the air vents that channel the fresh air from Monte Generoso," explains owner Marialuce Valtulini.

The valley's farmers deliver around thirty freshly-produced Zincarlin to the cellar each week. "The number of cheeses we get depends on the season. And the largest herd up here consists of ten cows. These dairy farmers turn the milk into cheese, which are then matured in our cellar by Nora, our cheesemaker.

The ageing process takes anywhere from thirty to sixty days, and involves rubbing each cheese with white wine. This prevents mould and gives the cheese its special rind." Once fully matured, the Zincarlin dala Vall da Mücc are delivered to a shop in Mendrisio specialising in regional products.

It was at her grandparent's farmstead that Valtulini ate her first Zincarlin. She used to spend her summers there as a child, helping them with the haymaking. "When my grandma was turning the curd into cheese, she used to send us shopping in the village so that we wouldn't eat it all. All the farmers in the valley knew the basic recipe. Back then, they would add spices or herbs to suit their taste," she remembers. 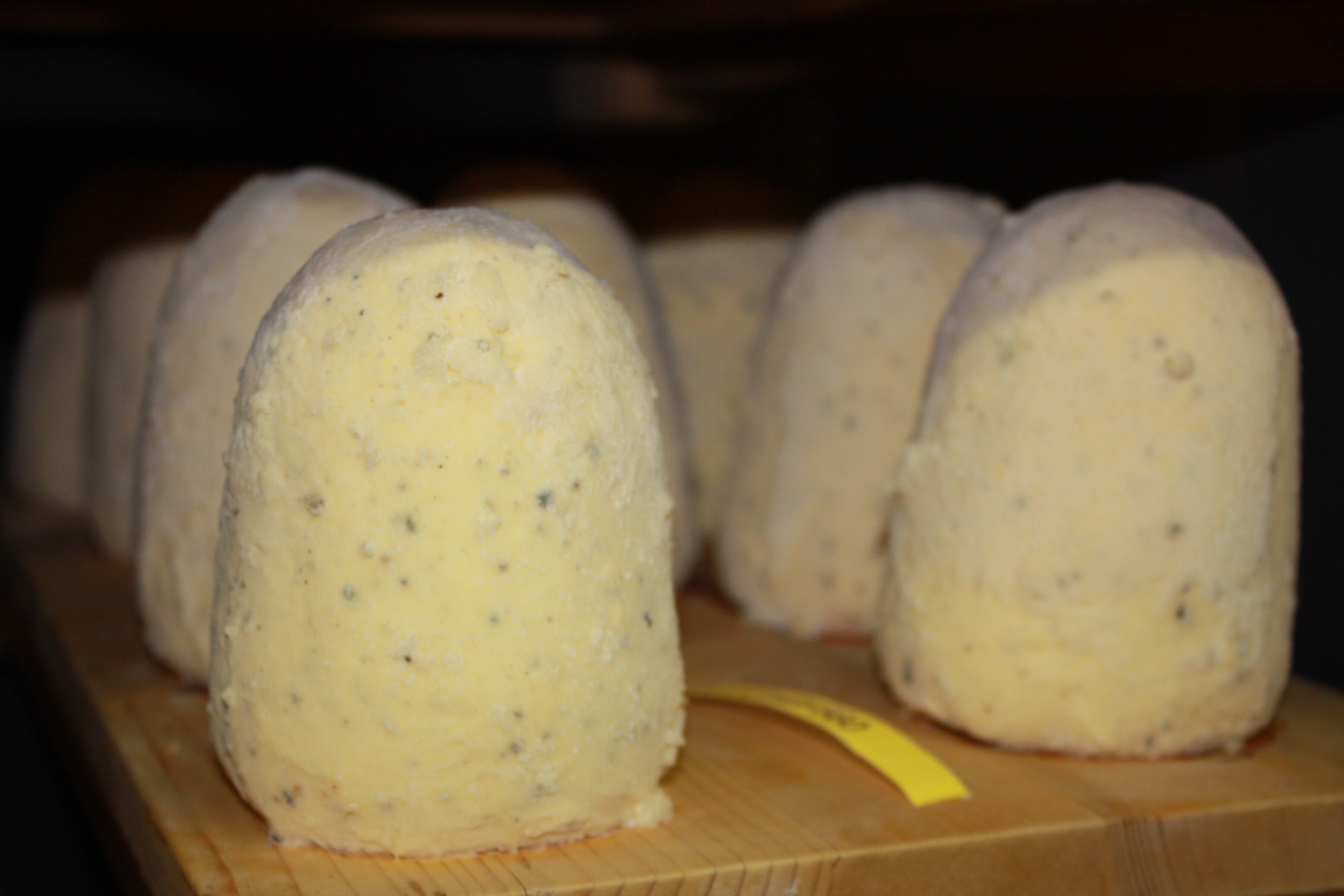 Valtulini lives in Morbio Superiore and trained as a teacher. She has been instrumental in saving this regional speciality. "It all started in 2002 at the chestnut fair, which is where all the local artisans of the valley meet. When Lorella Brichetti brought along her Zincarlin dala Vall da Mücc, we realised that a few families were still keeping this special cheesemaking art alive, even though the general public didn't know about it. We wanted to make sure the cheese didn't just die out, so we got the farmers together and approached Slow Food (a global movement promoting local food cultures and traditions) before creating an association," says Valtulini.

Since 2007, the age-old recipe has been reclaimed and used by dairy farmers to deliver their cheese to the cellar in Salorino. Traditional Zincarlin dala Vall da Mücc can now be enjoyed by both locals and tourists thanks to this system. There are also three local farmers selling fresh Zincarlin directly, or you can try it at some restaurants – best with honey, in a risotto, or as a mousse.

A name dating back to antiquity

"The word "zincarlin" comes from "zigra", meaning salted ricotta in pre-Latin. It also signals that it is a by-product from processing milk," explains Franco Lurà, president of Slow Food Ticino and former director of the Dialectology and Ethnography Center in Bellinzona. "The name reveals the ancient roots of the cheese, made during a time when everything was used up to make such products," he continues.

Slow Food has given its label to Zincarlin dala Vall da Mücc as a traditional cheese from the local valley."We felt that the know-how behind Zincarlin needed to be preserved, and that we should help regional producers market their cheese. Slow Food's values are all about returning to nature and local production, which fits this heritage cheese to a tee."

Passing on this know-how isn't easy, however. Right now, the Zincarlin tradition is being kept alive thanks to the enthusiasm of its makers. But as this generation of producers grows older, they are counting on the valley's younger generation having the energy and motivation to take up the torch.

So it's a good thing that young people living in the Mendrisio region are also interested in their natural surroundings. "We have a lot of local products in our shop – honey, polenta, biscuits – even a gin made in Sagno," says Valtulini. The drink was unwittingly discovered in 2012 by the former president of ProVaMM and has since been used as an alternative to the white wine in the Zincarlin aging process.

"I was pleasantly surprised by the local gin and tonic I tried at the chestnut fair. It showed me that these young people are also passionate about where they come from, including their beautiful, carefully cultivated garden where they grow the ingredients for their drinks. That's when I brought up the idea of using this local gin with the Zincarlin. We arranged a tasting session for both the cheese and gin producers, and that's how Gincarlin was born." A veritable symbol of the Muggio Valley's spirit to keep its traditions alive.